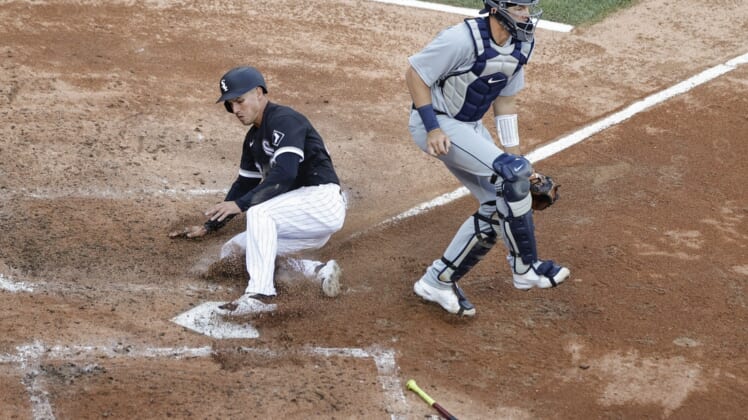 Carlos Rodon struck out 12 batters while winning for the fourth time in as many starts, Leury Garcia hit a two-run single, and the Chicago White Sox downed the visiting Detroit Tigers 3-1 in the first game of a doubleheader on Thursday.

The game was a makeup of a postponement on Wednesday.

Rodon only gave up two hits and a walk in six innings. Liam Hendriks pitched the seventh and final inning for his fifth save.

Rodon got off to a strong start, striking out Robbie Grossman and Miguel Cabrera in the first inning. He added Niko Goodrum and Wilson Ramos to the strikeout list in the second. He struck out the side in the third, setting down Victor Reyes, Grayson Greiner and JaCoby Jones in succession.

Mize got into some trouble in the bottom of that inning. Zack Collins led off with a double and moved to third on Billy Hamilton’s sacrifice bunt. Mize left Collins stranded by striking out Garcia and Tim Anderson.

Detroit broke through in the top of the fourth. Grossman led off with a single to left and Rodon set down the next two batters before Grossman stole second.

Schoop then pulled a changeup down the left-field line for a double, allowing Grossman to score the game’s first run.

The White Sox used two hits and two walks to score all three of their runs in the fifth. Jake Lamb led it off with a single and moved to second when Andrew Vaughn walked. Collins drew a four-pitch walk to load the bases.

Lamb scored on Hamilton’s groundout and Garcia knocked in two more by lifting a single to center.

Yoan Moncada led off the bottom of the sixth with a double to right. Tigers manager A.J. Hinch kept Mize in the game and was rewarded as the right-hander induced a Jose Abreu groundout before striking out Lamb and Vaughn.