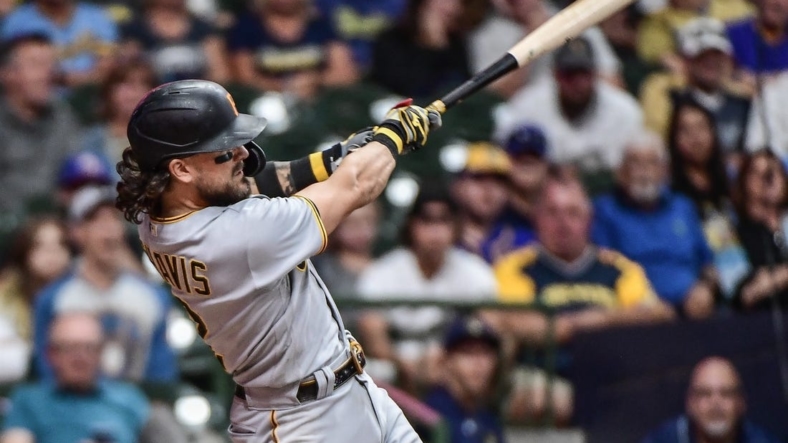 Rodolfo Castro drew a two-out walk with the bases loaded in the eighth inning for the go-ahead run as the visiting Pittsburgh Pirates rallied for a 4-2 victory over the Milwaukee Brewers on Tuesday night.

Oneil Cruz walked with one out in the eighth against Brad Boxberger (3-3), who relieved to start the inning. Bryan Reynolds singled and Ben Gamel walked with two outs to load the bases. Castro then walked on four pitches to put the Pirates up 3-2.

Pittsburgh added a run in the ninth when Michael Chavis singled, advanced on a sacrifice bunt and scored on Cruz’s double to left.

Milwaukee put runners at the corners in the bottom half with none out against Chase De Jong on a double by Kolten Wong and single by Keston Hiura, but he retired Andrew McCutchen on a pop to short and then enticed Luis Urias into a double-play bouncer to second for his first save.

Manny Banuelos (1-1) got the victory with 1 1/3 innings of scoreless relief.

Chavis brought the Pirates even at 2-2 in the seventh with his 14th homer, a two-out solo shot to left off Matt Bush.

Wong put the Brewers in front 2-1 with a two-run homer in the fourth. Hunter Renfroe singled to open and Wong then sent a 2-2 pitch 379 feet to right for his 11th homer.

The Pirates pushed across a run in the third but failed to capitalize on a bases-loaded opportunity. Jason Alexander retired the first seven hitters, striking out five, before Tucupita Marcano drew a one-out walk. Jason Delay was hit by a pitch and Cruz followed with an RBI single to right. Reynolds singled to load the bases, but Alexander escaped with a double-play tapper back to the mound.

Alexander, making his first start since July 12 after five relief appearances, allowed one run on three hits in five innings, striking out six and walking one.