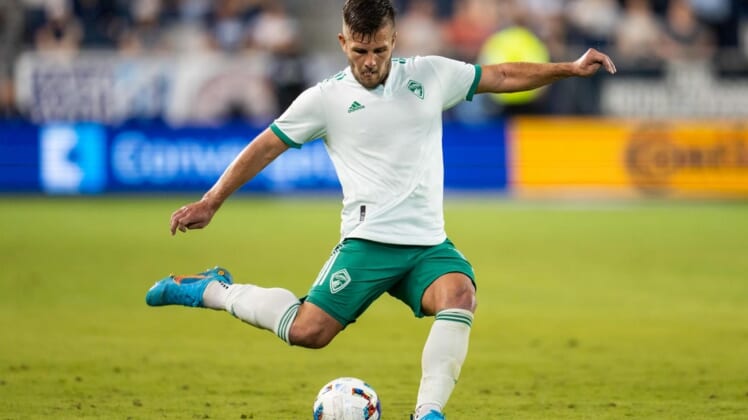 Possession of the Rocky Mountain Cup is at stake when Real Salt Lake hosts the Colorado Rapids in the second leg of their rivalry series in Sandy, Utah, on Saturday night.

The two Rocky Mountain Rivals played to a 1-1 draw in Colorado in April.

Salt Lake enters the match looking to regain the strong defensive form that has made the Utah club an early contender in the Western Conference. RSL (8-5-5, 29 points) had conceded just six goals in nine matches before falling 3-2 at Minnesota last weekend. Goalkeeper Zac MacMath posted five clean sheets in that nine-match stretch. He reached 500 career saves against the Loons.

Over its last five home matches, Salt Lake has conceded a single goal while outscoring opponents 8-1. Such stinginess is one reason RSL has claimed 20 of 24 possible points through the club’s first eight home matches.

Salt Lake’s defense unraveled against Minnesota when the club allowed three goals before sparking an unsuccessful rally with goals from Jefferson Savarino and Anderson Julio in the final 20 minutes.

“The most important thing is to remember that the mindset when you go down a goal is to make sure it’s not two,” RSL coach Pablo Mastroeni said. “We’ve been through this earlier in the year and these are lessons that you unfortunately have to relearn, so when we stuck with it and we played with the right type of mentality, we got right back in the game.”

The Rapids (5-8-4, 19 points) enter the match trying to snap a four-match winless streak (0-3-1) since beating Seattle on May 22. They have yielded three goals per match in all three losses.

Getting a result will require Colorado winning a road match for the first time this season. The Rapids have lost six of eight matches away from home and have claimed two of a possible 24 points. A victory will be the only way for Colorado to gain possession of the Rocky Mountain Cup. A draw or loss sends the rivalry trophy back to Salt Lake.

“The opportunity to win the trophy, it’s important to us, it’s important to our fans, and we spoke about it briefly today that it has to be important to everyone involved,” Colorado head coach Robin Fraser said. “It’s certainly a big game, they’re doing well and we’re not doing as well as we’d like to be and there’s no better way to get back on track than to get a good result against RSL, especially at their place.”

Getting Diego Rubio some help on offense will go a long way to improving the Rapids’ chances. Rubio has seven goals and two assists in 15 matches. None of his teammates have scored more than three goals so far this season.