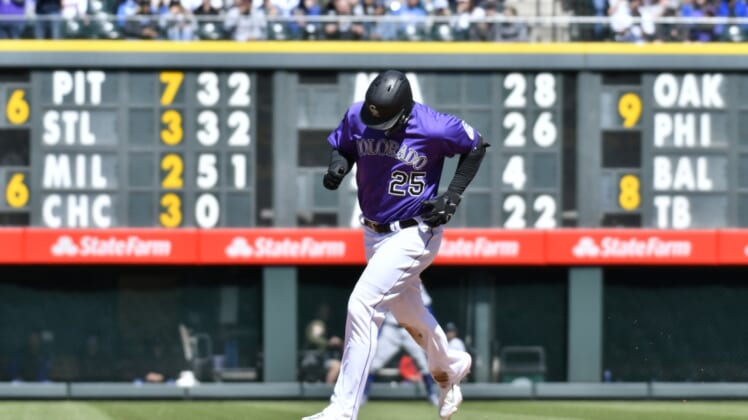 C.J. Cron and Elias Diaz homered and finished with two hits each, Yonathan Daza also had two hits, and the Colorado Rockies beat the Los Angeles Dodgers 9-4 in Denver on Sunday.

Jhoulys Chacin tossed 1 2/3 innings of relief and Ty Blach got the save with four innings of shutout ball to give Colorado manager Bud Black his 1,000th career win.

Colorado scored first for the third straight games, jumping on Urias in the first inning. With runners on first and second and two outs Taylor couldn’t corral Ryan McMahon’s wind-blown fly ball, and the error drove in both runners.

McMahon scored on Randal Grichuk’s single to make it 3-0.

The Rockies added to the lead in the third. Brendan Rodgers walked and Cron followed with his first home run of the season to make it 5-0. McMahon was hit by a pitch, Randal Grichuk walked and Diaz singled to drive in another run and chase Urias.

The Dodgers came back in the fourth. Turner singled, Will Smith walked and Bellinger singled to load the bases. Taylor drove in the first run with a sacrifice fly and Gavin Lux’s infield single reloaded the bases.

Chacin (1-0) relieved Senzatela and got Freddie Freeman to fly to left but Kris Bryant’s error allowed three runs to score.

Colorado got one back in the bottom of the inning when Connor Joe was hit by a pitch, stole second, moved to third on a flyout and scored on Rodgers’ sacrifice fly.

The Rockies increased their lead in the seventh inning off reliever Evan Phillips. With two outs, Grichuk reached on an error by Freeman and Diaz followed with a liner into the seats in left for his first home run of the season.