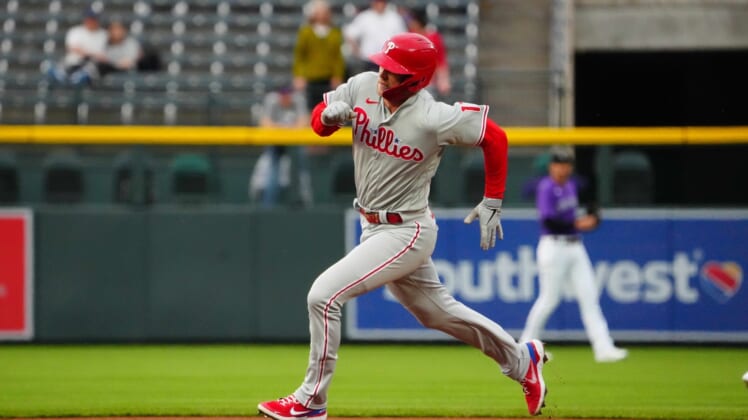 Justin Lawrence (1-0) tossed an inning of relief to earn the win, and Daniel Bard worked the ninth for his fifth save for Colorado.

Kyle Schwarber homered among his two hits, J.T Realmuto finished with three hits and Matt Vierling, Johan Camargo had two hits each for the Phillies. Camargo entered the game for Didi Gregorius, who suffered a left hand contusion when he was hit by a pitch in the second inning.

Kyle Freeland started hours after he agreed to a contract extension with the Rockies. The Denver native avoided arbitration by signing a five-year deal worth $64.5 million.

Philadelphia jumped on Freeland in the first. With one out, Rhys Hoskins tripled to center field and scored on Bryce Harper’s sharp single to left to make it 1-0.

The Phillies scored again in the fourth when Alec Bohm scored on a single by Vierling.

The Rockies finally got to starter Kyle Gibson in the bottom of the fourth. Charlie Blackmon and Bryant led off with singles to put runners on the corners, and Blackmon later scored on a sacrifice fly.

After Brendan Rodgers reached on a fielder’s choice, Randal Grichuk and Elias Diaz hit consecutive RBI singles to give Colorado the lead.

Freeland left with a 3-2 lead after allowing two runs on six hits over five innings, and Philadelphia rallied off reliever Ty Blach. Realmuto led off the sixth with a single and Schwarber followed with his third homer of the season to put the Phillies ahead.

Philadelphia starter Kyle Gibson allowed three runs on six hits in six innings but was denied the win when Colorado rallied in the seventh.

With two outs, Blackmon walked and Bryant singled off Seranthony Dominguez (1-1). Jeurys Familia then gave up a three-run homer to Cron, his sixth of the season.

Realmuto doubled with one out in the eighth and came home on Schwarber’s single to cap the scoring.