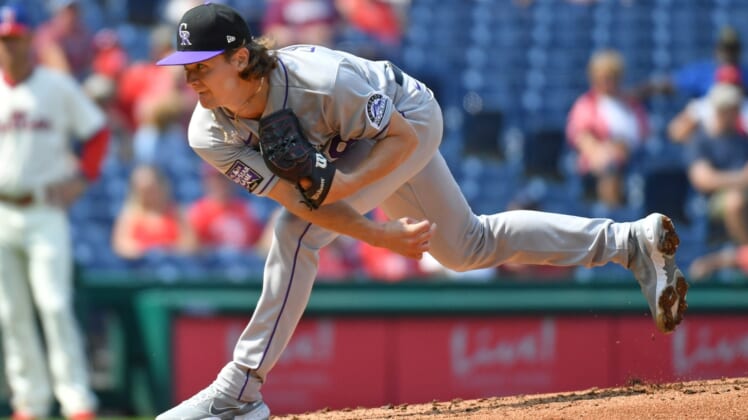 Top to bottom, the Philadelphia Phillies possess one of the best lineups in the major leagues.

The Phillies piled up the runs while winning the first two games of a four-game series against the visiting Rockies, prevailing 8-2 on Monday and 10-3 on Tuesday.

Philadelphia will look for its third straight victory when the series continues on Wednesday.

The Phillies’ attack was balanced on Tuesday. Odubel Herrera led the way with a home run, a double and three RBIs. Didi Gregorius and Bryce Harper added two hits apiece, and eight Phillies managed at least one hit.

“Everybody is doing the job they’re supposed to do,” Gregorius said in a postgame interview on NBC Sports Philadelphia. “It’s what makes this team very good.”

Gregorius was back in action Tuesday after missing five games due to a sore tendon in his left hand.

“He played well,” Philadelphia manager Joe Girardi said of Gregorius. “He was playing well before he got hurt. He swung the bat well. It’s good to have him back.”

The Phillies will hand the ball Wednesday to Ranger Suarez (1-0, 4.38 ERA). Suarez is 0-0 with a 1.00 ERA in two career appearances, one start, against the Rockies. That start came on Sept. 9, a solid six-inning performance in which he gave up one run on five hits and a walk while striking out six.

Harper played catch before the Tuesday game and said that his right elbow was still sore. It’s expected that Harper will be the Phillies’ designated hitter for a 10th straight game on Wednesday instead of starting in right field.

“I just want to get out there and play,” Harper said.

The Rockies will look to get back on track when they send Ryan Feltner to the mound for his first major league appearance this season. Feltner, who is 2-0 with a 3.98 ERA in four starts for Triple-A Albuquerque this year, would need to be added to the active roster.

Feltner, a 25-year-old right-hander, made one of his two big-league starts against the Phillies last season, allowing four hits and two runs in 3 2/3 innings during a no-decision on Sept. 12.

“He’s throwing well. He’s on our radar because he’s talented and he threw the ball well this spring with an uptick in velocity,” Rockies manager Bud Black said of Feltner on Sunday. “There were some things in his delivery that we needed to get through to him, and he’s a good listener (and) good learner.

“We’re hoping that those things get cleaned up this season because I think he can be a very solid major league starting pitcher. He’s really got to concentrate on keeping the ball down and elevating the ball when needed.”

However, Connor Joe went 0-for-5 to snap his career-best, 12-game hitting streak.

Rockies left fielder Kris Bryant was supposed to be in the lineup on Tuesday, but he was scratched before batting practice because of a sore back.

Black didn’t expect Bryant’s injury to be a big issue. He was more concerned with trying to shut down the Phillies’ offense.