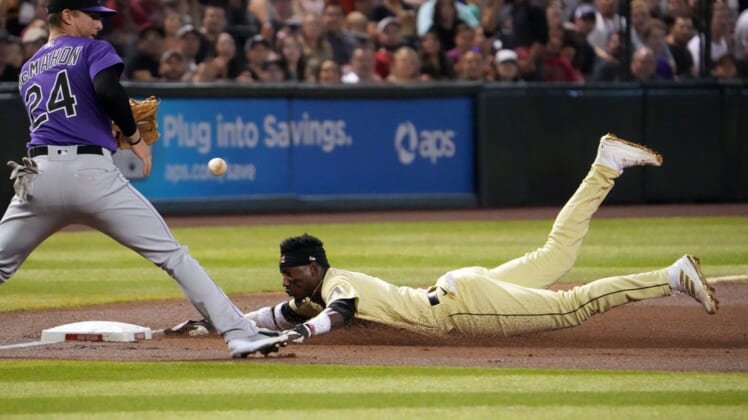 Kris Bryant smashed two homers and a long double and the Colorado Rockies survived the loss of two key starters while notching a 6-5 victory over the Arizona Diamondbacks on Friday night at Phoenix.

Bryant’s second three-hit game of the season helped the Rockies defeat Arizona for the second straight night to open the four-game series.

Sergio Alcantara hit a two-run homer and Josh Rojas added a solo shot for the Diamondbacks, who dropped their third straight game.

The Rockies lost first baseman C.J. Cron in the fifth inning with a left wrist contusion after he was hit by a pitch from Arizona’s Zac Gallen. X-rays were negative. Cron was 1-for-2 with an RBI.

Shortstop Jose Iglesias left an inning later with an apparent head injury after being involved in a collision at home plate with Diamondbacks catcher Jose Herrera. Iglesias was 2-for-3 with a run scored.

Colorado moved ahead 5-4 in the sixth as Iglesias drilled a double to left for the 999th hit of his career. He moved to third on an infield out and scored on a fielder’s choice grounder by Yonathan Daza, but the collision with Herrera left Iglesias woozy and he departed the game.

Bryant provided insurance by leading off the seventh with a 423-foot blast to left center to give the Rockies a two-run lead.

Colorado’s Chad Kuhl (6-5) gave up four runs and six hits over five innings. He struck out four and walked three.

Jose Colome worked out of trouble in the ninth to record his fourth save in five opportunities. Geraldo Perdomo and Carson Kelly had singles for Arizona to put runners on the corners with one out. Rojas hit into a fielder’s choice to score Perdomo and stole second but was stranded when Jordan Luplow lined out to shortstop Garrett Hampson to end it.

Gallen gave up four runs and six hits over five innings. He struck out seven and walked three.

Sean Poppen (1-2) gave up one run in two-thirds of an inning in the sixth for the Diamondbacks.

Bryant hit his first homer in the top of the first and Rojas answered with a leadoff blast in the bottom of the frame.

Alcantara’s blast in the second gave the Diamondbacks a 3-1 lead. Ryan McMahon’s infield out brought Colorado within one in the fourth before Rojas drove in Perdomo with a suicide-squeeze sacrifice bunt in the bottom of the inning.

The Rockies tied the game in the fifth as Gallen walked Brendan Rodgers with the bases loaded and then drilled Cron on an 0-2 pitch.