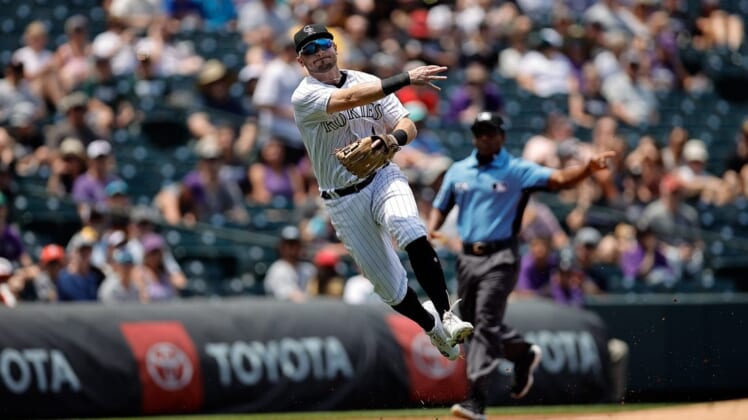 Jhoulys Chacin (4-2) tossed two innings of scoreless relief and Carlos Estevez worked the ninth for his first save.

The Rockies took advantage of Nabil Crismatt (5-2) in the sixth to break a 5-5 tie. Connor Joe walked, stole second and scored on Jose Iglesias’ double. Cron had an RBI single, and after Brendan Rodgers singled, Grichuk doubled off Luis Garcia to make it 8-5.

Trent Grisham homered and Manny Machado and Jorge Alfaro had two hits apiece for San Diego, which is 1-6 in Denver this season.

Cron got things rolling for Colorado in the second inning when he led off with a double to right field. Rodgers walked and Grichuk hit a slow roller past first base for a two-run double and a 2-0 lead.

Grichuk went to third on Daza’s flyout and two walks loaded the bases. Joe hit a sacrifice fly to right to bring home another run.

The Padres answered in the third inning. Esteury Ruiz led off with a double and stole third, and Grisham followed with a walk and stole second. Ruiz scored on a sacrifice fly by Ha-Seong Kim while Grisham advanced to third on the play.

He then scored on Jake Cronenworth’s sacrifice fly to cut the deficit to 3-2.

San Diego starter Blake Snell ran into control issues in the fourth. With two outs and a runner on, he gave up a single to Garrett Hampson and three straight walks to bring in two and put Colorado ahead 5-2.

The Padres got even off starter Kyle Freeland in the fifth. Grisham led off with a home run. Kim doubled and came home on Cronenworth’s single. Chacin relieved Freeland and gave up an RBI single to Alfaro to tie the game.