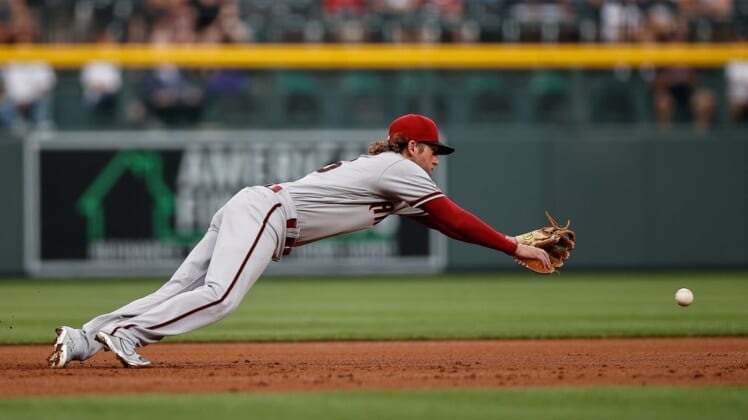 Brendan Rodgers hit a three-run homer and Connor Joe had a three-run triple to lead the Colorado Rockies to an 11-7 win against the visiting Arizona Diamondbacks on Saturday night.

Kris Bryant also had three hits for his second multi-hit performance in the past three games, and C.J. Cron and Charlie Blackmon each had two hits and two RBIs for the Rockies.

Austin Gomber returned to the starting rotation for the Rockies after getting moved to the bullpen and the left-hander went 5 2/3 innings, allowing four runs and six hits. Gomber (4-7) struck out two and didn’t walk a batter.

Arizona starter Dallas Keuchel (2-6) bounced back from a rough first inning and allowed seven runs (six earned) and six hits in five innings. The former AL Cy Young winner struck out three and walked three in his second start with the Diamondbacks.

The Rockies scored four runs in the first inning on an RBI single by Cron followed by a three-run blast from Rodgers for a 4-0 lead.

Walker homered to lead off the second to make it 4-1.

Gomber retired nine of the first 10 hitters before Cooper Hummel tripled to lead off the fourth. He scored on a single from Marte to trim the deficit to 4-2.

Keuchel got the first two outs in the fourth inning before Randal Grichuk doubled into the gap in right-center field. Ryan McMahon and Brian Serven then walked before Joe cleared the bases with a triple for a 7-2 lead.

Jake Hager led off the sixth for Arizona with a double and scored on a single by Jordan Luplow to make it 7-3. Marte went deep in the same inning to make it 7-4 and end Gomber’s night.

Jake Bird came in and surrendered a home run to Walker to make it 7-5, but the Rockies blew the game open with four runs in their half of the sixth.

Bryant delivered an RBI single with two out, Blackmon followed with a two-run double and Cron made it 11-5 with his second run-scoring single of the game.