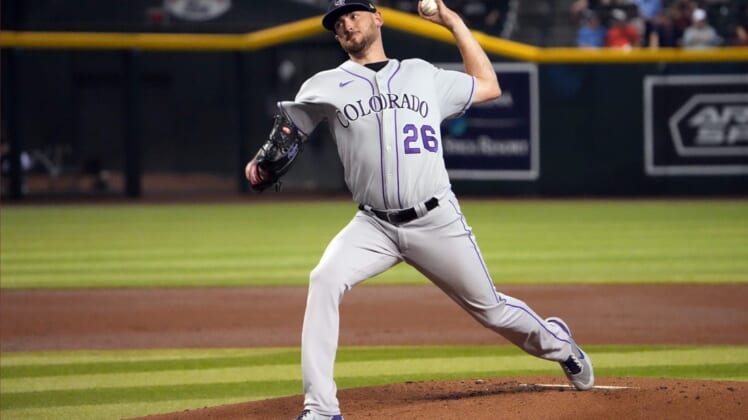 When the Colorado Rockies flew home from Minnesota on June 26, they had lost five of six games and were 11 games below .500. The All-Star break couldn’t come quickly enough for a struggling team.

Now, with one game remaining before a four-day pause for the All-Star Game, Colorado is riding a five-game winning streak.

The Rockies can make it six in a row and sweep Pittsburgh when they close out the three-game series against the Pirates on Sunday in Denver.

Left-hander Austin Gomber (5-7, 6.11 ERA) will get the start for Colorado while Pittsburgh has yet to name a starter.

Gomber is making his fourth straight start after two relief appearances. He returned the rotation against Arizona on July 2 and has gone 2-0 in the three start. In his past two outings, he has tossed 11 innings, struck out eight and allowed just four runs.

Gomber got the nod for Sunday over Antonio Senzatela, who was placed on the 10-day injured list with right shoulder tightness but is ready to come off of it. He has not pitched in the majors since leaving his June 2 start against the Arizona Diamondbacks.

“We felt he is coming off a couple of good starts,” Rockies manager Bud Black said of Gomber. “Senzatela is ready as well, but we decided as a coaching staff to pitch Austin and Senza will get a little extended break from Tuesday (his last start with Triple-A Albuquerque) to Sunday and then he will pick up after the (All-Star) break somewhere.”

Gomber will make his seventh appearance and third start against the Pirates. He is 0-2 with a 5.51 ERA in his career against Pittsburgh.

The Pirates are stumbling to the break having dropped their past four — two at Miami and the first two in Denver — but still has a chance to finish their 12-game road trip at 6-6 if they can capture the finale against Colorado on Sunday.

One bright spot for the Pirates recently has been the story of Jason Delay. The 27-year-old catcher was considering retiring from baseball last month before his call-up to the Pirates. He has made the most of his first chance in the major leagues.

Delay didn’t play in Saturday’s game — a day game after a Friday night game — but could be behind the plate for the Pirates on Sunday afternoon.

Delay went hitless in his major league debut on June 14 and was 1-for-10 in his first five games but is 7-for-17 in the past six. He has also been solid behind the plate, which has helped him stick with Pittsburgh.

“It shows you that we feel really strongly about how Jason has caught the baseball,” manager Derek Shelton said. “He’s done a really nice job. He’s executed at the plate, had some big hits for us, and we just thought that he (earned) a little longer runway to continue catching here.”