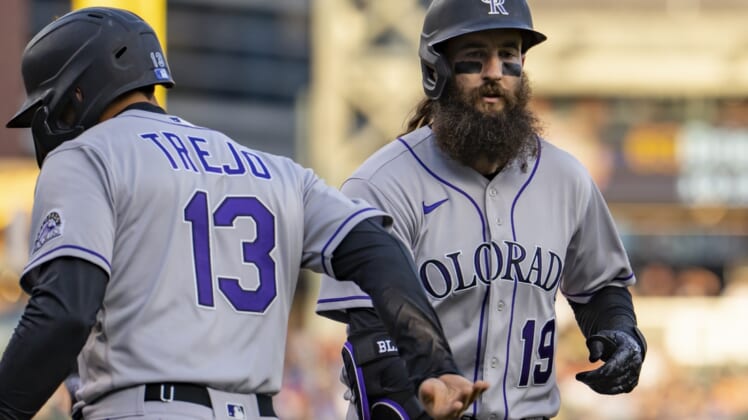 Austin Gomber tossed six strong innings, Charlie Blackmon and Connor Joe homered, and the visiting Colorado Rockies beat the Detroit Tigers 3-2 on Saturday night in the nightcap of a doubleheader.

Alex Colome got the final three outs for his second save for Colorado, which earned a split of the day-night twin bill. Friday night’s rainout forced the teams to play two games Saturday.

Austin Meadows had a two-run triple and Beau Brieske (0-1) allowed three runs on three hits in five innings for the Tigers in his major league debut.

Gomber (1-1) kept Detroit from mounting any kind of rally. He allowed four hits, retired 15 of the last 17 batters he faced and struck out eight over his six innings.

The Rockies wasted little time in ending their scoreless drought. Joe hit the second pitch of the game into the seats in left to give Colorado a 1-0 lead. It was Joe’s third home run of the season.

The Rockies struck again in the third inning. Alan Trejo reached on a one-out single, and after Joe flew out to center, Blackmon hit his second home run of the season on the first pitch of his at-bat to put Colorado ahead by three runs.

The Tigers got a rally going in the seventh off reliever Robert Stephenson.

Eric Haase and Spencer Torkelson led off with full-count walks to put runners on first and second. Willi Castro grounded sharply into a forceout at second to put runners on the corners, and then Castro stole second base to put both runners in scoring position with one out.

But Stephenson got Meadows to pop out to third and then struck out Harold Castro to keep Detroit off the board.

Jeimer Candelario led off the ninth with a single and Robbie Grossman walked with two outs. Meadows drove them in with a triple but Colome struck out Harold Castro to end the game.