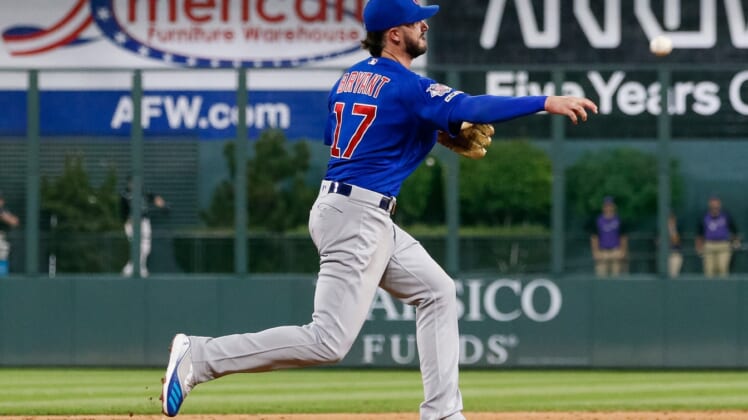 Colorado Rockies third baseman Nolan Arenado and Chicago Cubs third baseman Kris Bryant are two of the biggest names on the trade market. As both organizations weigh offers for their respective stars, the Rockies and Cubs have also reportedly discussed a one-for-one swap.

According to ESPN’s Jesse Rogers, Chicago and Colorado engaged in dialogue on a blockbuster trade that would see both teams swap All-Star third baseman. As part of the deal, the Rockies would reportedly cover some of Arenado’s salary as part of the deal.

It’s a new wrinkle in a trade market that has been flooded with speculation about where Bryant and Arenado could land. While the Rockies reportedly view an Arenado trade as unlikely before spring training, the chance to replace him with another MVP-caliber bat could be intriguing.

Arenado signed an eight-year, $260 million last offseason and is owed $35 million annually over the next five seasons. However, the 28-year-old’s contract contains a player option following the 2021 season, when Bryant’s contract also expires.

Bryant lost his grievance against the Cubs for the team’s manipulation of his service time in 2015. As a result of losing the case, he will remain under contract control through arbitration for the 2021 season.

Arenado hit 41 homers with 118 RBI and a .962 OPS this past season with the Rockies. While he doesn’t have an MVP award in his trophy case like Bryant, he’s a five-time All-Star and has won seven consecutive Gold Glove Awards for his defense at the hot corner.

While a deal of this magnitude might remain unlikely, it’s a fascinating turn in the MLB offseason that both teams at least considered it.