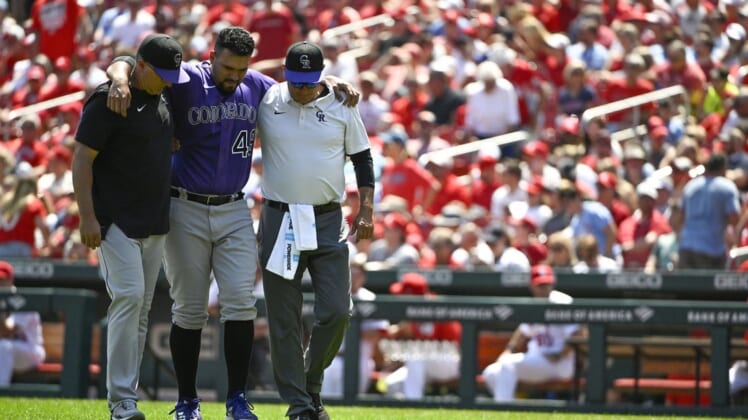 Blackmon was injured running to first on an infield single in the first inning, while Senzatela appeared to hurt his left knee while trying to avoid a collision near first base in the second inning.

Blackmon, 36, initially stayed in the game but was replaced by Wynton Bernard in right field in the bottom of the second.

Senzatela was running toward first after a ground ball to the right side by Cardinals designated hitter Brendan Donovan with two outs in the second. The right-hander made an awkward step to avoid colliding with first baseman Elehuris Montero, then hobbled off the field before falling to the ground in obvious pain.

Senzatela, 27, was clutching at his left knee area before being helped off the field. He was replaced by left-hander Austin Gomber.

Donovan was credited with an infield single, with Tommy Edman scoring from third base on the play to extend the Cardinals’ lead to 4-0.

Senzatela allowed five runs on six hits over 1 2/3 innings. He struck out two and saw his ERA climb to 5.07 through 19 starts this season.