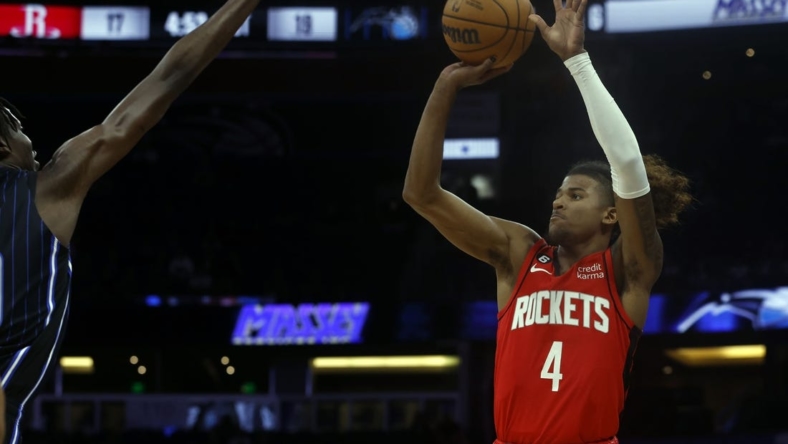 Jalen Green scored a game-high 34 points to lead five in double figures as the Houston Rockets snapped a six-game skid with a wild 134-127 road win over the Orlando Magic on Monday.

Houston held on despite nearly blowing 124-107 lead with just over five minutes to play. Behind Paolo Banchero (30 points, six rebounds, four assists and two steals) and Franz Wagner (23 points on 9-of-12 shooting) the Magic kept rallying before finally running out of steam.

KJ Martin scored 21 off the Houston bench while hitting 4 of 8 3-pointers. Alperen Sengun posted 20 points and 10 rebounds while Eric Gordon added 19 points and five threes as the Rockets made a season-high 24 3-pointers while shooting a robust 50 percent from behind the arc.

With Green scoring 12 points in the third, the Rockets appeared to seize control with a 20-4 run for a 100-83 lead on a Gordon free throw. But the Magic scored the final five points of the period, capped by a wild Chuma Okeke buzzer-beater, and extended that rally into the fourth, closing to within 103-100 on an extended 17-3 run that included a flurry of Terrence Ross jumpers.

But the Rockets followed with a three-point play from Sengun before Daishen Nix, Tari Eason and Martin drilled threes in succession to build the lead to 115-100. When the Rockets again extended to a 17-point advantage, the Magic mustered a reply, and when Ross (21 points, 15 in the fourth quarter) hit a corner 3 with 45.2 seconds left, Orlando sliced the margin to 131-127.

The Rockets made just one basket inside of the arc in the first, but with Gordon and Green combining to drill 6 of 9 3-pointers, Houston shot a blistering 9 of 18 from deep en route to a 33-30 lead entering the second. The Rockets utilized a 12-4 closing run to secure that advantage after the teams combined for three ties and seven lead changes in the first period.

Houston cooled a bit in the second but not by much. The Rockets amassed a season-high 71 points in the first half while shooting 14 of 30 from beyond the arc with those made threes also a season best for any half. The Rockets also shot 9 of 12 from inside the arc in the second quarter to help fend off the Magic, who poured in 36 paint points while shooting 65.8 percent overall.