Rockets owner has ominous quote about his team’s roster 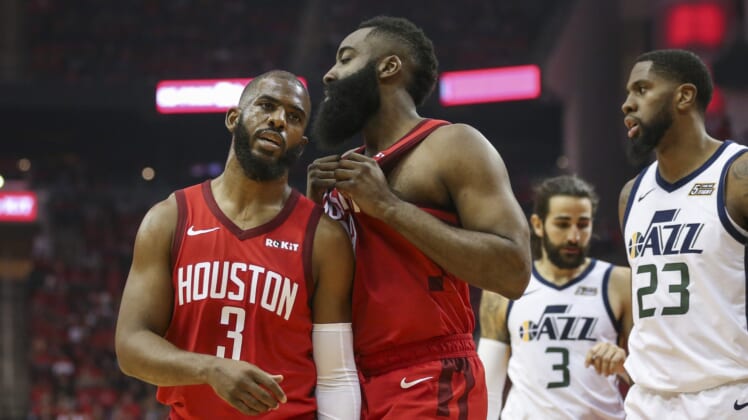 The NBA world was thrown for a loop earlier on Wednesday when ESPN’s Adrian Wojnarowski reported that every single member of the team could be available in trade talks this summer.

While Woj did note that a James Harden deal seemed unlikely, the likes of Chris Paul and Clint Capela could be had for the right price.

Rockets owner Tilman Fertitta followed that up later on Wednesday with a pretty big indictment of his team’s current roster.

“Our organization’s position is why be a fourth seed and one of the top teams but know you probably can’t win a championship with this exact team,” Fertitta told Jonathan Feigen of the Houston Chronicle. “So, it’s what I said the night after the loss (to Golden State). Wherever we can improve coaching or players, let’s do it.”

Houston dropped Game 6 of the Western Conference Semifinals at home against a Golden State Warriors team that was without both Kevin Durant and DeMarcus Cousins. That sent them packing for the season.

This has led to speculation that major changes could be in store for the team’s roster once July comes calling.

Fertitta’s comments will obviously add even more to this narrative. Among those who could be moved, Chris Paul’s contract would be hard to trade. Meanwhile, Clint Capela and Eric Gordon seem to be valuable assets for the Rockets.

Either way we spin it, the 2019-20 version of these Rockets are going to look a lot different than what we saw this past season. That’s for sure.