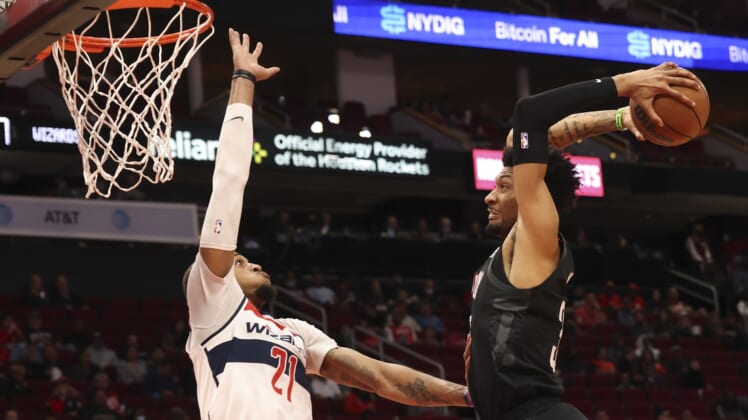 Christian Wood scored 30 of his career-high 39 points in the second half as the Houston Rockets erased a 23-point deficit to beat the visiting Washington Wizards 115-97 on Monday.

Wood finished 14 of 18 overall and 8 of 9 on 3-pointers to help the Rockets snap a five-game losing skid. He scored 15 points in the third quarter and 15 more in the fourth, making all four of his 3-point attempts to send the partisan home crowd into a tizzy. Wood also had 10 rebounds.

Jalen Green added 17 points, six rebounds and five assists for the Rockets, who shot 20 of 39 from behind the arc. Eric Gordon scored 15 points and Dennis Schroder tallied eight points, four rebounds and five assists and was instrumental in a 16-0 run bridging the third and fourth frames for Houston, which took its first lead at 86-83 on a Garrison Mathews 3 with 11:01 left.

Wood scored 13 points during one critical run in the third period, recording two dunks and three 3-pointers including one with 3:39 left that cut the Wizards’ lead to 77-76. Washington found a measure of stability and stretched its margin back to seven points, but Green closed the period with a steal and layup plus an alley-oop dunk assisted by Schroder that sparked Houston again.

The Wizards were ablaze in the first quarter, with Hachimura, Porzingis and Daniel Gafford combining for 22 points on 9-for-11 shooting. Neto recorded six assists in the opening period as Washington shot 16 of 24 overall, boosted by reserves who scored 15 of the Wizards’ 39 points.

Opening the second period with an 11-2 burst capped by a Corey Kispert 3-pointer, the Wizards led 50-28. Porzingis talled four points and assisted on the Kispert 3 during that rally, and Washington eventually extended its lead to 54-31 before Houston finally responded.

Green was the linchpin of a 15-3 run that cut the deficit to 57-46, and his 3 off the glass just before the buzzer answered a Wizards surge and pulled Houston to within 63-51 at the break.