Rockets’ Clint Capela bashes Warriors ahead of this week’s game 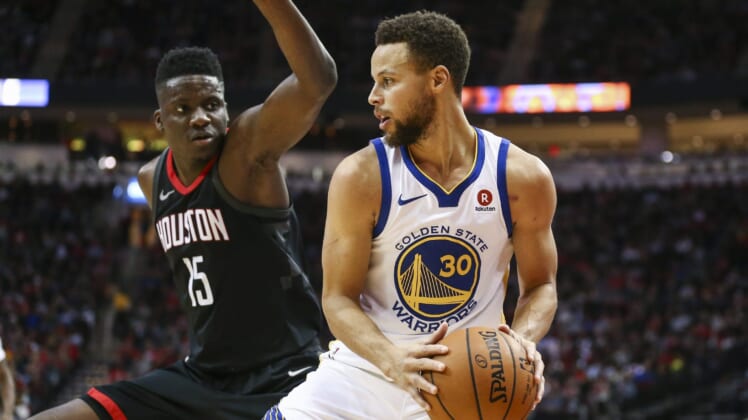 The Houston Rockets are looking to complete a four-game season sweep of the two-time defending NBA champion Golden State Warriors this week.

Houston will host a struggling Golden State squad while in the midst of a nine-game winning streak Wednesday night. It’s not as much a statement game for the Rockets. Rather, it’s all about them gaining even more confidence heading into the playoffs.

For the Warriors, this certainly does seem to be a statement game. Following his team’s humiliating home loss to the Phoenix Suns on Sunday, Stephen Curry pretty much said as much.

“The beauty of the NBA is that on Wednesday we have an opportunity to send a statement. We have to take advantage of that opportunity. We’re looking forward to it, no question,” Warriors guard Stephen Curry said. The Warriors are at Houston on Wednesday.

In response to that, Rockets center Clint Capela took time out of his day to blast both Curry and the Warriors.

Clint Capela on Steph Curry calling Wednesday's game against the Rockets a statement game: "Maybe for them, but for us the last game is to build for the playoffs so we want to keep our defense consistent and get better."

More Capela on Curry calling Wednesday's game a statement game: "Maybe they're in that situation where they need to (call it a statement game) to prove themselves that they are at that level."

It’s rather obvious that Golden State has not been getting up for games recently. It has lost six of 10, including that defeat at the hands of a conference-worst Suns squad. It’s a trap teams can easily fall into, especially when vying for a fifth consecutive NBA Finals appearance.

Even then, things are not clicking for the Warriors as they head into Wednesday night’s game. Houston will want to pounce — sending a clear message in the process.

And if it takes some extra motivation for the Warriors to get up for a regular season game against the hottest team in the NBA, maybe that is a problem.

On the other hand, the playoffs are really what matters for Golden State. Houston found that out the hard way in the Western Conference Finals last season.