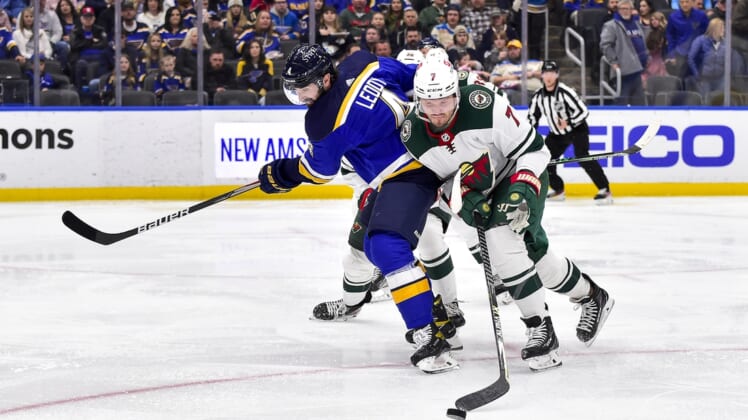 Robert Thomas scored 1:27 into overtime and the St. Louis Blues moved into a tie for second place in the Central Division with Minnesota with a 4-3 come-from-behind victory over the visiting Wild on Friday night.

Thomas, who also had an assist, one-timed a Vladimir Tarasenko pass from the bottom of the left circle into the top left corner for his 17th goal of the season.

Justin Faulk had a goal and an assist, and Pavel Buchnevich and Brayden Schenn also scored for St. Louis (41-20-10, 92 points), which extended its point streak to seven games (6-0-1). Ville Husso made 35 saves.

Kirill Kaprizov, Kevin Fiala and Jacob Middleton scored goals for Minnesota (43-21-6, 92 points), which blew a 3-1 third-period lead. Cam Talbot finished with 24 saves for the Wild, who still have one game in hand on the Blues.

St. Louis jumped out to a 1-0 lead at the 4:36 mark of the first period on a power-play goal by Buchnevich. Thomas set up the score with a crossing pass to the right circle where Buchnevich one-timed a shot inside the near post for his 25th goal of the season.

Minnesota tied it late in the first period when Fiala knocked in a rebound of a Tyson Jost shot from inside the blue line for his career-high 24th goal of the season.

Minnesota took a 2-1 lead midway through the second period when Kaprizov, alone in the slot, intercepted Thomas’ pass from the right corner and quickly roofed a wrist shot into the top left corner. It was the 41st goal of the season for Kaprizov, one off the team single-season record set by Marian Gaborik in 2007-08 and tied by Eric Staal in 2017-18.

Middleton extended the lead 3-1 just 18 seconds into the third period when he fired a wrist shot from the top of the left circle through traffic that clanged in off the far post for his fourth goal of the season.

Faulk cut it to 3-2 with a wrist shot from the right circle that went over Talbot’s glove and under the crossbar for his 11th goal of the season.

Schenn then tied it at the 10:28 mark when he went down the left wing and around defenseman Jordie Benn and flipped a backhand shot past Talbot’s glove side for his 21st goal of the season.