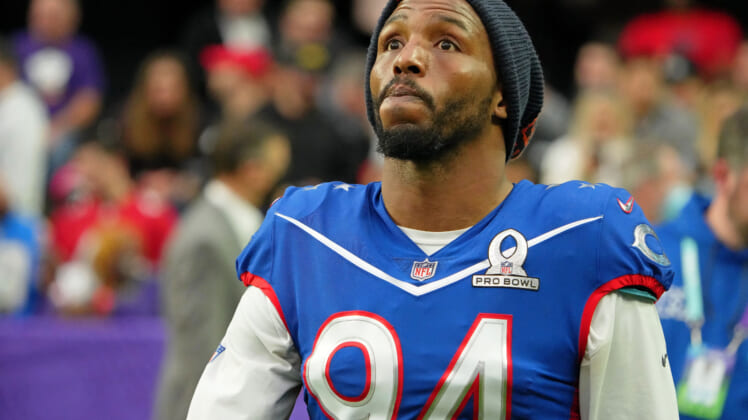 The 2022 NFL Draft is less than 48 hours away. This means trade rumors, smokescreens and several other “nuggets” dropping in the next few days are either to be taken seriously or are completely worthless. Well, the Chicago Bears and Robert Quinn are adding to the pile, which one, remains to be seen.

In what appears to be an effort to tear the roster foundation down in an effort to rapidly rebuild starting in 2023, the Bears are shedding salary at an enormous rate. Not only that, they haven’t given 2021 11th overall pick Justin Fields much to work with, so much so that some believe Da Bears are deliberately tanking.

With no first round pick to use thanks to the Fields trade made by former general manager Ryan Pace a season ago, the Bears won’t have anything to do on draft day. It won’t be until Day Two, when pick No. 39 comes around that the Bears are officially on the clock.

All of this is to say, they don’t seem set on competing for a Super Bowl in 2022.

Because of their general approach and direction, the Bears may soon trade another established veteran, whether it’s to shed salary, open up other playing opportunities, or to do a veteran a favor, Robert Quinn might be on the outs in Chi-town.

According to Ian Rapoport and Jason Lieser, the Bears seem more likely to trade Quinn, than hold onto the three-time Pro Bowl pass rusher at this point.

At 31, under contract through 2024, teams will surely have interest in adding the sack artist to their roster. Based on the tea leaves, we’re speculating three potential trade destinations for Quinn to land with in 2022.

This one makes too much sense not to happen. The Cowboys lost Randy Gregory in free agency thanks to an odd contract dispute and never really replaced his production. Not yet anyway. That could quickly change by bringing back a familiar face in Robert Quinn who spent the 2019 season in Big D.

In that time, Quinn racked up 11.5 sacks, parlaying his performance into the long contract he now holds with the Bears. If his services are no longer valuable in Chicago, Quinn would likely entertain a reunion, placing the star on his helmet once again.

Jacksonville Jaguars go offense at No. 1, trade for Quinn

This could be an intriguing fit. If the Jacksonville Jaguars ultimately decide they prefer to take an offensive player with the first overall pick, suddenly pass rusher becomes a pressing need, which could still be addressed later. Another potential alternative to ensure immediate contributions is to trade for an established vet, such as Quinn.

Quinn could help bridge the gap between the now and the next-generation set to restore the Jaguars’ roar. Immediately, he’d form a dominant duo paired with Josh Allen on the edge. It may be more than the Jags had earmarked to improve along the defensive front, but the potential payoff could land them in the playoffs.

Related: NFL insider suggests Jacksonville Jaguars are deciding between 4 players at No. 1 – Previewing some options

Baltimore Ravens find a way to finagle the bagel

Another team spurned this offseason by a free agency agreement gone wrong at the last minute, the Baltimore Ravens still have a need to improve their depth chart outlook along the edge. Za’Darius Smith didn’t land back in B-More, but they could arguably land an even more effective rusher by trading for Quinn.

2021 first-round pick Odafe Oweh flashed talent a season ago, but he needs help and Quinn, having spent 11 seasons in the NFL, likely has a lot of vet moves he’d be willing to share. Not only could Quinn suddenly help improve a unit that tied for 21st in the NFL in sacks a year ago, he could help mold their future for years to come.