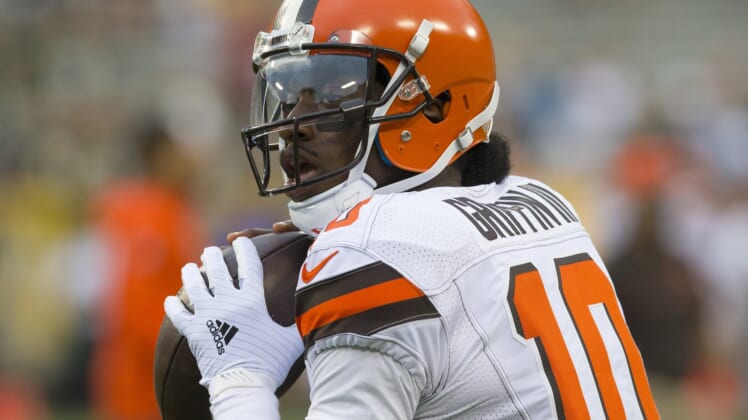 Let’s start out by saying Robert Griffin III and Terrelle Pryor appear to have some excellent chemistry. But let’s not kid ourselves. RG3 wasn’t sharp on Friday night when the Cleveland Browns played the Green Bay Packers at Lambeau Field.

RG3 connected with Pryor on a long bomb to open the game, and it was a thing of beauty.

Griffin III dropped back, saw Pryor had a a step on his man and let the ball fly. It was almost a perfect throw, and it was particularly impressive because RG3 got hit low as he threw it.

Unfortunately, he also got hit a lot. And hit hard.

This isn’t anything new for people who’ve been watching Griffin III throughout the years. He tends to get blasted.

Being that he’s not a particularly big guy, this has proven problematic in the past. Let’s hope it does not continue to be a problem going forward.

Getting hit is never a good thing, but here comes the bad. Just two plays later, RG3 was intercepted by Micah Hyde. In the end zone.

RGIII gets picked off by Micah Hyde in the end zone. #CLEvsGB https://t.co/HoucJRTlkb

Griffin III tried to anticipate where tight end Gary Barnidge would be, but he overshot his mark. Worse still is the fact that Barnidge wasn’t even turned around to look for the pass, indicating some miscommunication.

In the end, Griffin finished having completed just four-of-eight passes for 67 yards with no touchdowns, the interception and a passer rating of 39.1.

Take away the 49-yard pass to Pryor and you’re looking at a stat line that looks much worse.

Now, obviously there is no reason to panic. RG3 and the Browns are still getting things worked out in Hue Jackson’s first season. The offensive line is still a work in progress as well.

But this does seem to mirror reports coming out of practice last month that indicated Griffin III isn’t exactly looking like a savior for the Browns (more on that here).

There is still time to figure all this out. It’s only Week 1 of the preseason. That said, it’s going to be fascinating to see if things get any better going forward.