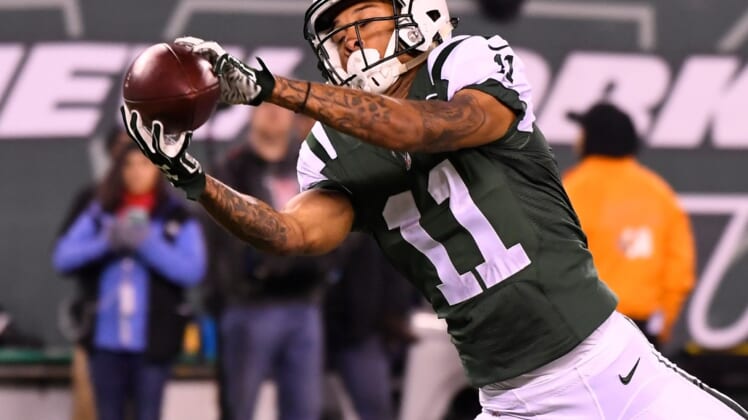 But most recently, Anderson has made the news for all of the wrong reasons. A new report reveals that Anderson has been charged on 10 separate occasions for traffic-related violations, according to ESPN’s Rich Cimini.

According to Florida court records from both Broward and Orange counties, the 10 separate violations stem back to 2014. Per Cimini, Anderson has received five speeding tickets, including two in 15 days last spring.

Some of Anderson’s violations include misdemeanor charges stemming from resisting arrest and reckless driving. He was also pulled over two times in one day on March 29, 2017. In these incidents, Anderson was cited for not wearing a seat belt and speeding 40 miles-per-hour over the limit, per the report.

Then last May, Anderson was charged with allegedly resisting arrest with violence at a music festival. That carries a felony charge and the case is pending, per Cimini.

Anderson’s most recent arrest made headlines on Jan. 19 when he was charged on nine separate accounts. The severest account of that day was a second-degree felony charge for allegedly threatening a family member of a public servant (more on that here.)

Anderson has since pleaded not guilty to the nine criminal account accounts, which include three felony charges.

At only 24-years-old, this is quite the laundry list of violations.

Anderson’s January arrest could result in some form of league suspension. Per the report, head coach Todd Bowles has yet to weigh in on Anderson’s standing with the team. Anderson displayed promising talent on the field last year and he is clearly the Jets’ current best option at receiver.

It should be interesting to see if the Jets decide to keep him around. Or, perhaps they wash their hands of a player prone to attracting trouble.