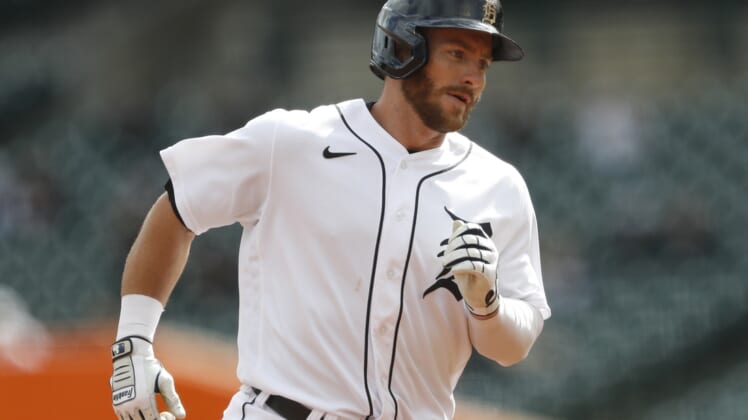 Robbie Grossman went 3-for-3 with a home run and two runs to help lead the Detroit Tigers to a 7-3 home win over the Minnesota Twins on Saturday.

Harold Castro also had three hits, Niko Goodrum had three RBIs and Michael Fulmer was the winning pitcher in relief, allowing one hit and striking out three in 2 2/3 scoreless innings of work for the Tigers.

The Tigers opened the scoring when Grossman blasted a solo home run to right field to make it 1-0 Detroit in the first.

Detroit then took a 2-0 lead in the bottom of the fourth when Goodrum hit a line drive past a drawn-in Minnesota infield, then hustled into second base for an RBI double.

Minnesota responded in the fifth, tying the game at 2-2 after a single to lead off the inning by Max Kepler and a 2-run home run to left by Josh Donaldson that measured 425 feet.

Minnesota continued to rally in the fifth by loading the bases with one out and chasing Tigers starter Jose Urena out of the game, but Fulmer came on in relief and induced a popout and a flyout to end the threat with no further runs allowed.

The score remained that way until the seventh, when Detroit scored five runs to take a 7-2 lead.

Detroit took a 3-2 lead on an RBI infield single by Miguel Cabrera. He hit a hard ball to third that was stopped on a dive by Donaldson, who couldn’t get up in time and make a throw to home or first base.

Goodrum and Jake Rogers then each hit 2-run singles with the bases loaded to give Detroit a 7-2 lead.

Minnesota responded in the eighth, cutting Detroit’s lead to 7-3 on an RBI double by Donaldson.

The Twins loaded the bases with two outs in ninth, but Kepler grounded out to first to end the game.