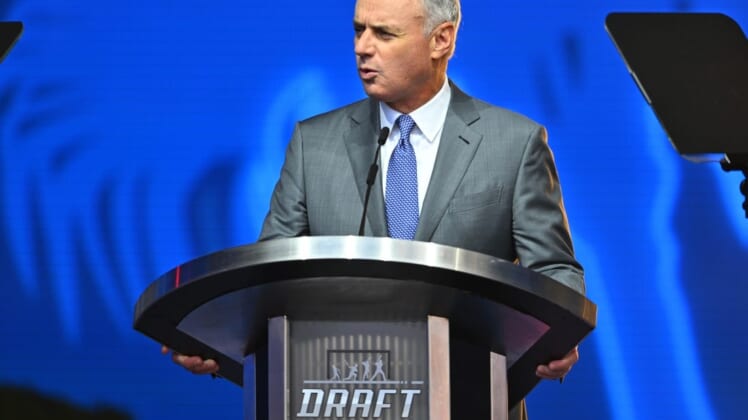 Manfred said RingCentral Coliseum isn’t up to major league standards during a session with the Baseball Writers’ Association of America prior to Tuesday’s All-Star Game in Los Angeles.

The Athletics’ lease expires after the 2024 season.

“I was at the Coliseum myself recently,” Manfred said. “The condition of the Coliseum is a really serious problem for us. I’ve said it, this is not news. It is not a major league-quality facility at this point.”

Athletics owner John Fisher has looked into the possibility of a new ballpark in Las Vegas while also being engaged in talks for a waterfront ballpark at the Howard Terminal site in Oakland.

Approval was gained late last month to reclassify the 56-acre terminal at the Port of Oakland to a mixed-used designation that would allow a ballpark to be built. Other legal hurdles remain.

“I’m hopeful that that can still happen,” Manfred said of building a ballpark in Oakland. “And I said this recently and I’ll repeat, it needs to happen now. It needs to be done.

“Mr. Fisher has to make a decision as to whether he wants to make an agreement or can make an agreement that is approved by the City Council that would keep the A’s in Oakland. If that’s not possible, we have a process that deals with an application for relocation, and I assume that’s where it goes if in fact no agreement can be made in Oakland.”

The Tampa Bay Rays have a lease through the 2027 season and also badly need a new facility.

Tropicana Field is located in St. Petersburg, and Manfred said he would like to see a new ballpark on the Tampa side of the bay.

“I have always thought that a stadium on the other side of the causeway would be preferable in some respects,” Manfred said. “But there’s a variety of factors that have to be taken into account in terms of determining whether you’re going to be in St. Pete or in Tampa: What financing is available? What sites are available? How quickly you can get in the ground? It’s not just the location.”

The Rays had previously floated the idea of splitting the season between the Tampa Bay area and Montreal, but MLB rejected that idea.

“We are hopeful that we can find ourselves in a world of 32 teams rather than 30,” Clark told reporters.

However, Manfred doesn’t see that happening in the short term.

“I need to get Oakland and Tampa resolved before we could realistically have a conversation about expansion,” Manfred said.

Cities such as Las Vegas, Nashville, Charlotte, Orlando, Montreal and Portland are among expansion candidates.