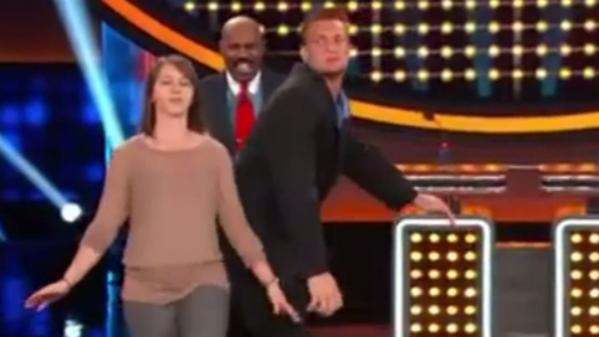 Energetic as always, Gronk didn’t disappoint his fans who may have been hoping to catch some of his signature twerking.

The Gronkowskis faced off with Holly Robinson Peete and her family. One of the questions perfectly tailored to the tight end was to name something that could be “inflated or deflated.” Gronk, apparently still sensitive about the “Deflategate” topic, stated this (via complex.com):

Gronk passed that question to the Peete family. After the Peetes struck out, the Gronkowskis were able to steal by giving the response, “tires.”

So Gronk passed on "Something that can be inflated or deflated" … pic.twitter.com/Ya7PudvWNs

Gronk’s reaction to one of his brother’s answers to a different question is priceless.

Unfortunately for the Gronkowskis, the Peete family claimed victory.

Apparently, Gronk’s team’s loss was much more than this poor child could handle.