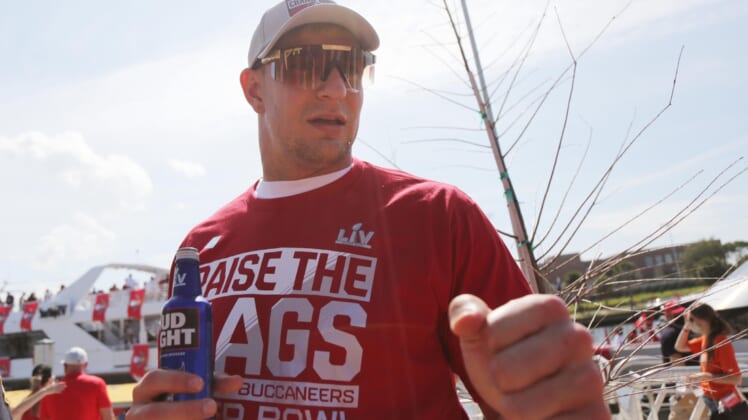 Tight end Rob Gronkowski is ready to run it back with the Tampa Bay Buccaneers.

The Super Bowl champions confirmed Monday that they re-signed Gronkowski to a contract.

The team did not divulge the terms of the deal, however agent Drew Rosenhaus told NFL Network and ESPN last week that the sides agreed to a one-year contract. The Athletic and NFL Network reported that the contract will pay Gronkowski $8 million and includes the opportunity to earn another $2 million in incentives.

Gronkowski admitted that he talked with a couple of other teams while exploring free agency before signing with Tampa Bay.

“I wanted to be back with the Buccaneers organization,” Gronkowski said Monday. “The setup here is just unbelievable. The chemistry that I’ve built over the last season is fantastic.

“… But it’s football, you never know how things are going to play out, so it’s just good to listen to what else was out there. And there was something to an extent, but overall everything just fell into place right away on the first day. So, I just didn’t want to waste any time.”

“Everything just fell into place.”

“In addition to his contributions on the field, Gronk has quickly become one of the most beloved guys in our locker room,” Bucs general manager Jason Licht said. “His ability to perform at a championship-caliber level week after week, while also uplifting everyone around him, makes him an invaluable presence in our building. Rob’s accomplishments speak for themselves and make him one of the greatest to ever play the game at his position. We are thrilled to have him back with us as we pursue another title in Tampa.”

A four-time All-Pro, Gronkowski produced modest numbers by his standards in the 2020 regular season: 45 catches for 623 yards and seven touchdowns. In the Buccaneers’ first three playoff games, he totaled just two catches for 43 yards, but he was a key contributor in the Super Bowl against the Kansas City Chiefs, making six receptions for 67 yards and two TDs in the 31-9 win.

“It was a great feeling,” Gronkowski said of playing in all 20 games (16 regular season, four playoffs) last season. “It was something I wanted to prove to myself that I could do. I can play a full season and a full postseason, and at a high level, too.”

The Brady-Gronkowski connection has accounted for 14 career playoff touchdowns, the top figure for any quarterback/pass-catcher duo in league history.

Gronkowski, selected by New England in the second round of the 2010 draft out of Arizona, played for the Patriots from 2010-18, compiling 521 catches for 7,861 yards and 79 touchdowns. He topped the 1,000-yard receiving mark four times.