EXCLUSIVE: Rob Font aims for an ‘easy night’ vs Marlon Vera by not giving ‘Chito’ his chaos

Rob Font returns to the UFC’s Octagon on April 30 to face fellow top-10 bantamweight Marlon Vera. It’s a matchup that fans are expecting to be an all-out war, however, the Boston native has designs on an “easy night” and not succumbing to the chaos “Chito” tries to create in his fights.

After winning four straight and landing in the top five of the UFC’s 135-pound division, Font tasted defeat for the first time in three years when he lost to Jose Aldo by unanimous decision in December. His hard-fought defeat to the MMA legend did not diminish his stature in the division and that’s why he was a bit surprised he was offered a booking against eighth-ranked Vera, instead of the fight he felt made the most sense. That being against fourth-ranked former interim title challenger Cory Sandhagen.

“I was familiar with [Vera]. I figured one day we were gonna fight. But he definitely wasn’t on my radar,” Font told Sportsnaut. “Obviously, I’m trying to fight guys in front of me. I was hoping [and] think that a Cory Sandhagen fight made sense. Both [of us] coming off a loss, he’s ranked right in front of me so I was hoping [for that fight].”

It’s not to say he doesn’t have a lot of respect for Vera. The Ecuadorian is one of the most exciting fighters in the division and is coming off a landmark win in his November destruction of future UFC Hall-of-Famer Frankie Edgar. However, in being the higher-ranked fighter Rob Font feels that while a stoppage win over Vera is a meaningful victory in the division, it may not do much to bump him up in the rankings.

“It’s a little bit we’re fighting backward, but it’s a tough fight. We got a main event, and it’s still a lot of exposure. I feel like this is a great matchup. If I can finish him — which he hasn’t been finished much — it says a lot. [But] I don’t think it says too much at the same time,” he says. “I’m in a weird spot where I have to get through this and sort of be in the same spot.”

Font on Vera fight: ‘I can make this an easy night’

Font vs Vera is a scrap UFC fans are looking forward to. Their reputations proceed them and MMA observers are expecting it to be a violent encounter high on impactful striking. That’s exactly how Vera wants. He revels in the chaos of a wild cage fight. However, Font is well aware of that fact and doesn’t intend on letting things head in that direction. Instead, the 34-year-old plans on frustrating his foe and making it an easy night of work inside Las Vegas’ UFC Apex.

“‘Chito’s’ the kind of guy who needs chaos. He needs that, and if I’m not giving him that chaos and not giving him the scrambles he gets frustrated. You see it a lot,” said Font. “Going out there, being the smoother, slicker, more patient sharpshooter I think will frustrate him, to open him up to do something big. He does a lot of empty kicks. Where it’s a kick but just by itself, with no hands or feints behind it. If I can make him miss, make him pay, get him backing up, shelling up, biting on all my feints, I do believe I can make this an easy night.”

Rob Font knows that strategy will be easier said than done. But it’s all a part of his evolution as a fighter. He understands being the smarter and more technical competitor on fight night will get the best, and easiest, results. However, he also knows those plans can go awry in the heat of the battle, and maintaining the focus to stick with the strategy will be the hard part of this upcoming matchup.

“I really do believe if I’m disciplined and I’m real sharp with my defense, I’m gonna have a pretty successful night just keeping him at range with my jab and finding my shots … But, I say that now and we go in there and he hits me and it’s like whatever,” he said with a laugh. “It’s that car crash. [Avoiding that is] the hard part.” 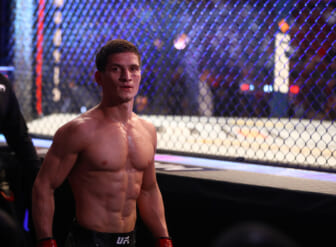 Rob Font vs Marlon Vera will headline the UFC April 30 card in Nevada. The event will air exclusively on the streaming service ESPN+.