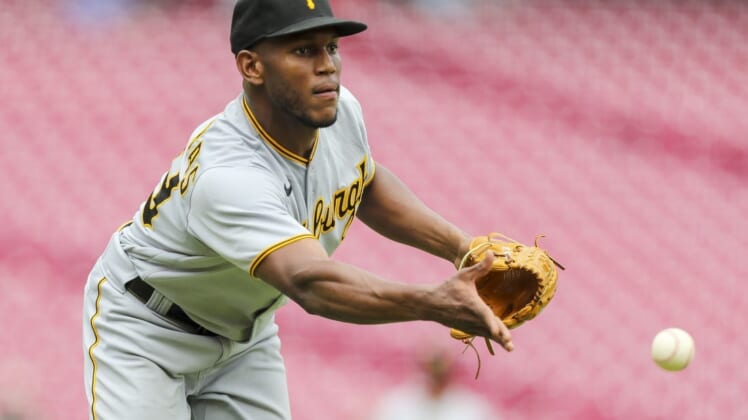 Roansy Contreras allowed just one run in a career-high six innings to lead the visiting Pittsburgh Pirates to a 4-2 win over the Cincinnati Reds on Thursday in the first game of a day-night doubleheader.

Contreras (3-2) bounced back from yielding seven runs — including three homers — in only 1 2/3 innings in his last start. He scattered four hits, struck out seven and walked just one on Thursday.

Duane Underwood Jr., Wil Crowe and David Bednar pitched the final three innings for the Pirates, who opened their 12-game, 11-day road trip on a winning note. Bednar worked a scoreless ninth for his 14th save in 17 chances.

Donovan Solano homered and had three hits for the Reds, who lost for a fifth time in seven contests on their season-long 11-game homestand.

Cincinnati starter Mike Minor (1-6) held the Pirates without a hit through the first four innings and retired the first 10 batters he faced.

Diego Castillo opened the fifth inning with his ninth homer of the season. He drove Minor’s changeup over the wall in deep left-center for a 1-0 Pittsburgh lead.

Solano responded in the bottom half of the inning with his first homer of the season, and first in a Reds uniform. The homer snapped a 1-for-20 slump for Solano, who drove the fastball from Contreras over the wall to tie the game at 1-1.

The Pirates responded immediately against Minor in the sixth when Ke’Bryan Hayes legged out an infield hit to third and Bryan Reynolds was hit by a pitch. Michael Chavis then drilled a first-pitch hanging slider to the wall in left-center for a two-run double and a 3-1 Pittsburgh lead.

Pirates catcher Jason Delay recorded his first career hit in the seventh inning, an RBI double to the gap in right-center field that scored Ben Gamel for a 4-1 Pittsburgh lead. That double chased Minor, who was charged with four runs on five hits.

A depleted Reds bullpen took another blow in the seventh inning when Luis Cessa had to depart due to injury during an at-bat to Reynolds. Right-hander Ian Gibaut made his Cincinnati debut in relief of Cessa.