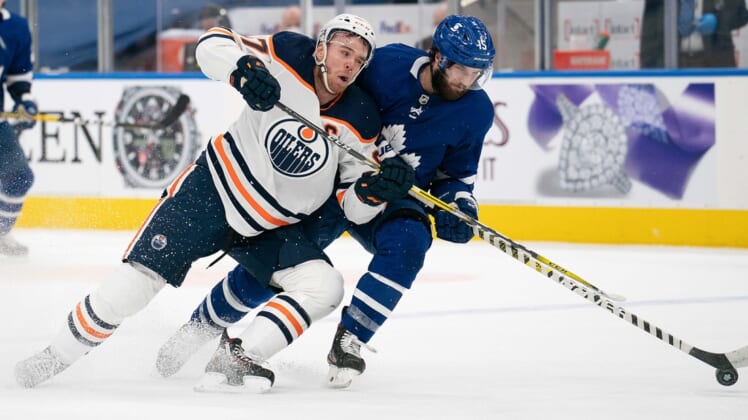 The Edmonton Oilers are home, looking to reignite after a wacky road trip, and are now recharged as they play host to the Calgary Flames Friday night.

The Oilers headed out March 21 to play a trio of games in Montreal before two clashes in Toronto. Instead, due to a COVID-19 outbreak among the Canadiens, they found themselves stranded in the city for a few days, played twice in Toronto on March 27 and March 29 and then ended with a single game in Montreal one night later before returning west.

As a result, they were on the road for 10 days, and ended the trip with three games in four nights, finishing with a 4-0 loss to the Canadiens on Tuesday, which snapped a 4-0-1 run. Captain Connor McDavid — who was named the North Division’s player of the month — called the sojourn “one of the longest road trips I think I’ve ever been on and we played three games.”

A quick one-game homestand before heading back to Montreal, is an opportunity to reboot.

“I don’t know if it is so much (about) physical energy as mental energy,” coach Dave Tippett said. “You go on the road for that long and you’re locked in a hotel that long, it wears on you. Hopefully we got home and got a little energy back.”

Saturday’s scheduled home game against the Vancouver Canucks has been postponed, so the Oilers’ return home is for only one game. Calgary’s scheduled game in Vancouver on Wednesday was postponed a couple of hours before puck drop because two Canucks players, as well as a coach, tested positive.

The Canucks aren’t expected to be back in action until next Thursday, and four of Vancouver’s games have been rescheduled.

The Oilers have pressed on with the task at hand, preparing to face the Flames for the
seventh time this season. Edmonton has won four of the previous six games, the most recent a 7-3 shellacking on St. Patrick’s Day.

In those six games against Calgary, McDavid has racked up six goals and 14 points, and part of the preparation was to separate him and Leon Draisaitl to provide scoring depth. McDavid on Thursday practiced on a line with Ryan Nugent-Hopkins and Jesse Puljujarvi. Draisaitl skated with Dominik Kahun and Kailer Yamamoto.

“I don’t think we’ve given up a whole lot of goals as a line, but I think we can produce a little more, create a little more offense,” said Draisaitl, who has netted one goal and has eight points in the half-dozen clashes with Calgary this season.

As much as the Flames had to adjust their plans on the fly, the more important quest is to cobble together a winning streak. Calgary has lost five of six games and is falling further outside a playoff spot. The Flames — who are 10 points behind their Alberta rivals — have been guilty of blowing leads and losing control of close games at the first sign of trouble.

In their last outing, a 5-1 loss to the Winnipeg Jets, they took an early lead but ended up blown out of the water.

“Adversity is tough, but I think people and teams can also grow together through those moments as you fight through whatever it is — a bad call, a bad goal, a bad break,” forward Derek Ryan said. “You can grow in those moments as you realize you can fight through it. … That’s a team-building moment, when you’re able to build together and stick together through those harder times.”

It’s easy to write off Calgary’s playoff hopes, but the Flames are doing their best to remain positive.

“Everyone has to play better and rise to the challenge,” defenseman Noah Hanifin said. “We do have a challenge in the schedule ahead of us and have to make up some ground, obviously, but it’s important for everyone to look themselves in the mirror and do whatever they can to help this team win.”