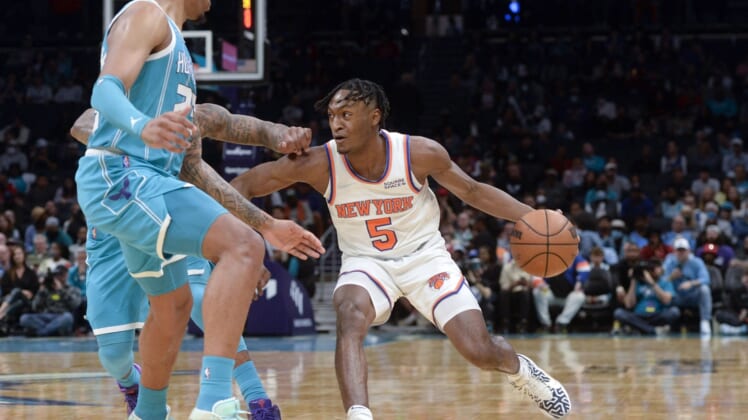 RJ Barrett scored 30 points and the New York Knicks used hot shooting to set the tone en route to a 121-106 victory over the host Charlotte Hornets on Wednesday night.

Obi Toppin added 18 points and a game-high 11 rebounds, Alec Burks had 17 points and Evan Fournier and Taj Gibson both had 12 points as the Knicks stayed in playoff contention despite playing without standout Julius Randle, who’s nursing a quadriceps injury.

Jericho Sims and Immanuel Quickley both had 10 points for the Knicks (31-42), who ended up 20 for 45 on 3-point launches with eight players hitting at least one.

Barrett scored 30 points for the second game in a row, this time shooting 10-for-19 from the field.

The Hornets fell to 3-1 on their five-game homestand, having previously defeated playoff-contending Atlanta, Dallas and New Orleans. The Knicks finished 15-for-17 on free throws while the Hornets were 9-for-17.

Ball hit a 3-pointer to close the gap to 92-86 late in the third quarter. But the Knicks gained control again before the end of the session.

The Knicks led 69-56 at halftime, boosted by Barrett’s 15 points. Ball’s 19 points by the break were key for the Hornets, who were 5-for-21 on threes by that juncture. New York shot 14-for-26 on first-half 3-point attempts. Six Knicks had multiple 3-point baskets in the half.

The Knicks posted a 40-24 lead through the first quarter. Charlotte later cut into a 20-point hole with a 12-5 stretch in the last 2 1/2 minutes of the half.

Charlotte won the first two meetings with the Knicks this season.