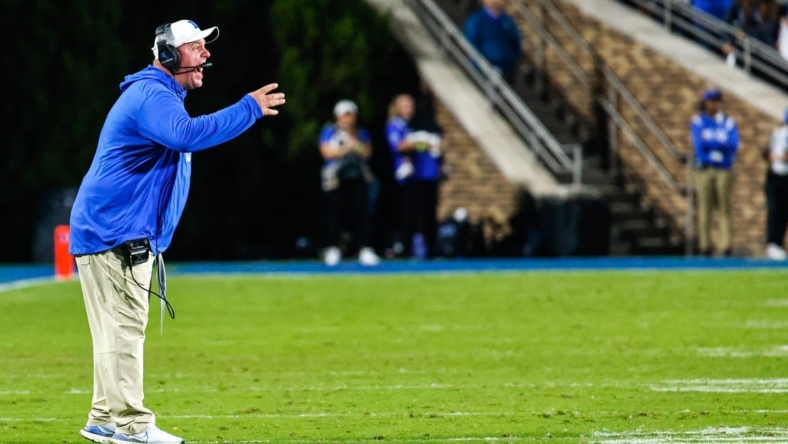 The Blue Devils (6-3, 3-2 ACC) rushed for 232 yards, eclipsing the 200 mark for the sixth time this season. Jaquez Moore had two of the team’s four rushing scores.

Duke quarterback Riley Leonard completed 16 of 24 passes for 158 yards and a touchdown, and he added a game-high 96 yards and a score on 13 carries.

Duke opened the game with a six-play, 90-yard touchdown drive. Leonard called his own number for a 60-yard TD, his ninth on the ground this season.

After the teams traded three-and-outs, the Eagles scored on a six-play, 72-yard drive. A 22-yard Alex Broome run and a 36-yard Morehead-to-Griffin connection set up a 2-yard touchdown toss to Flowers.

Duke ate 5:53 and made it 17-7 on a Jordan Waters 7-yard run to begin the second. Another Blue Devils drive starting near midfield ended with Sahmir Hagans catching an 8-yard touchdown with 4:16 until halftime.

In the final minute of the half, Boston College cut its deficit to 24-14 as Morehead found Griffin for a 2-yard high ball in the corner of the end zone.

The Blue Devils opened the second half with Moore’s 24-yard run up the middle, capping a six-play, 63-yard drive.

A fourth-down catch by Griffin kept an 80-yard drive going and allowed Flowers to score on an 18-yard catch-and-run with 3:31 to go in the third, bringing the Eagles within 31-21.

Moore punched in a 2-yard score on Duke’s first play of the final quarter, completing an eight-play, 50-yard series.

Connor Lytton’s 34-yard field goal made it 38-31 in the final minute of regulation.