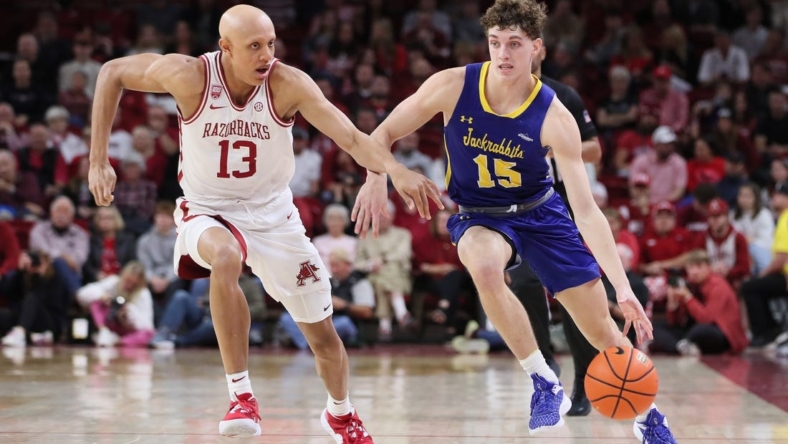 Ricky Council IV scored 19 points on 8-of-12 shooting to lead No. 9 Arkansas to a 71-56 victory over South Dakota State in nonconference play on Wednesday night at Fayetteville, Ark.

Arkansas shot 45.9 percent from the field, including 7 of 22 from 3-point range. The Razorbacks held a 42-32 advantage on the boards while Anthony Black had four of the club’s 14 steals.

South Dakota State made 32.1 percent of its shots and was 3 of 16 from behind the arc.

The Jackrabbits were unable to keep up with Arkansas after beating St. Bonaventure 66-62 on a neutral court in Sioux Falls, S.D., on Tuesday night before traveling to Fayetteville.

Matt Dentlinger split two free throws to start the second half for South Dakota State before Arkansas ripped off 11 straight points. Council finished the spurt with a dunk to make it 52-30 with 16:54 remaining.

Council scored 11 first-half points as Arkansas led 41-29 at the break.

Arkansas led by three midway through the first half before rattling off eight straight points. Council drained a 3-pointer and added a dunk to cap the run and make it 24-13 with 7:48 remaining.

South Dakota State later pulled within 31-27 on a dunk by William Kyle III with 2:29 left in the half.

The Razorbacks responded with 10 straight points. Makhi Mitchell converted a three-point play to cap it and made it 41-27 with 35 seconds to go.