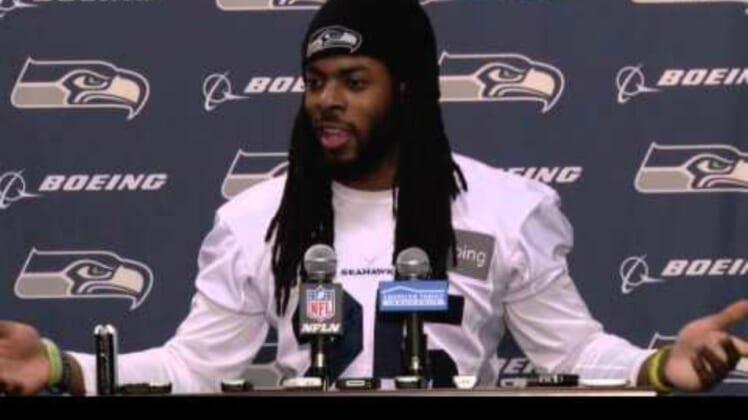 Sherman didn’t field questions from anyone. Instead, he chose to talk about recent police-involved shootings.

The entirety of Sherman’s statement was captured by Brady Henderson of 710 ESPN in Seattle.

The Seahawks’ star emoted many thoughts. One of them was his frustration with what example is being set for kids and how they’re supposed to interact with police.

“I do a lot of community service. I go out there to try to help kids, to try to encourage them to be better, to aspire more,” the outspoken Sherman said. “When you tell a kid, ‘when you’re dealing with police, put your hands up and comply with everything’ and there’s still a chance of them getting shot with no repercussions for anyone. That’s an unfortunate time to be living. That’s an unfortunate place to be in.”

“There’s not a lot you can say to inspire someone, to say ‘We need black fathers to be in the community to be there for their kids,’ but they’re getting killed in the street for nothing. For putting their hands on their cars. So, when a guy takes a knee, you can ignore it, you can say he’s not being patriotic and not honoring the flag. I’m doing none of those things. I’m saying it straight up. This is wrong and we need to do something.”

The next action, of course, will be figuring out what that “something” is.

In the mean time, whether it comes during the national anthem or at some other point, we can certainly bet on seeing more protests and demonstrations prior to NFL games this week.