The Tampa Bay Buccaneers have been ravaged by injuries in the secondary. After winning Super Bowl LV, the Bucs are hungry to get back to the postseason. Early Thursday morning, five-time Pro Bowl cornerback Richard Sherman announced on his podcast he plans to sign with the reigning Super Bowl champs.

Sherman also reportedly considered reuniting with his old teams in the San Francisco 49ers and Seattle Seahawks but decided on Tampa Bay after a Tom Brady recruiting pitch.

A three-time All-Pro, Sherman remained unsigned after his contract with the San Francisco 49ers expired. Sherman didn’t receive a lot of interest this offseason as an unrestricted free agent, but his brief encounter with the law couldn’t have helped manners.

While Sherman is now 33, he’s likely a better option than the internal options on hand in Tampa Bay. Or at least healthier.

In Week 1, the Bucs lost starting corner Sean Murphy-Bunting. Most recently, in Week 3, they lost Jamel Dean. Even fourth-year corner Carlton Davis has battled through some injuries early on. 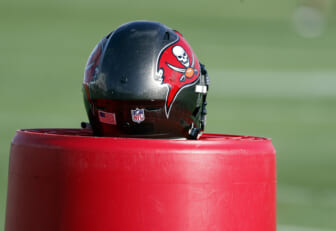 Now, by pairing up with TB12, Sherman hopes to have a chance to add his second career Super Bowl ring after winning with the Seahawks in 2013.

For what it’s worth Sherman is only a season away from grading at 88.9 with Pro Football Focus. If Sherman can come close to his 2019 form, the Bucs may have just gotten another steal, as they did a year ago with the trio of Tom Brady, Rob Gronkowski, and Antonio Brown.