Before the San Francisco 49ers season began, many pointed to cornerback depth as one of the primary areas of concern on the roster. Following Jason Verrett’s season-ending surgery, discussion about a reunion with Richard Sherman became prevalent.

Sherman played very well for the 49ers in 2020. While he dealt with injuries, the Pro Bowl cornerback complemented the secondary nicely. Both talented and a trusted leader in the locker room, a return to San Francisco seemed realistic this offseason.

But the veteran defensive back wanted to take things slow, letting the market play out. Seeking a chance to compete for a Super Bowl and a salary that matched his contributions, most anticipated he would sign during training camp. All of that was thrown out the window following his arrest for domestic violence.

Sherman, who is facing five misdemeanor charges, is currently working to get things back on track. He is in playing shape, now attending therapy to address the issues that caused his mental health incident. 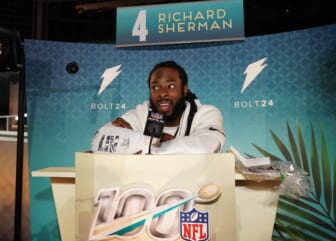 NFL teams are taking notice, talking to the future Hall of Fame cornerback in recent weeks. Now, his former general manager is at least publicly expressing a willingness to bring Sherman back later in the season.

“Who knows, we could need [Sherman] down the road. Most of all, I’m pulling for him and his family. He’s going to overcome this and do great things.”

John Lynch made it clear nothing is imminent and the organization is confident in its depth at cornerback. While that is a bit surprising, considering none of San Francisco’s cornerbacks rank among PFF’s top 30 at the position, the 49ers are likely expecting growth as the season unfolds.

For now, NFL teams will likely wait for Sherman’s legal situation to play out and to see if the NFL suspends him. Once those matters are cleared up, it shouldn’t be long before he is back on the field with a Super Bowl contender.