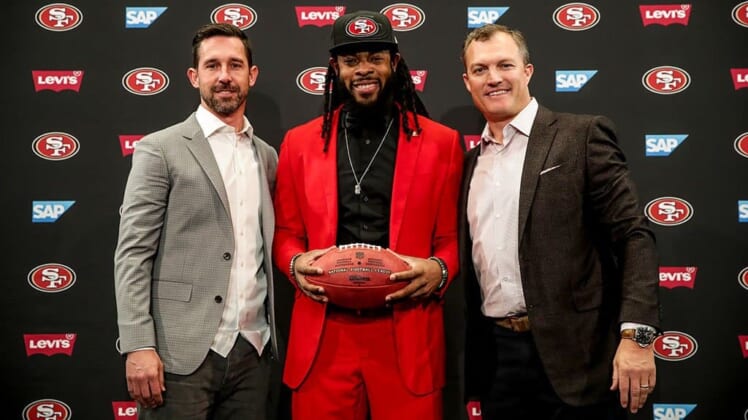 Richard Sherman was officially introduced as the newest member of the San Francisco 49ers on Tuesday. Like always, Sherman was colorful in his introduction to the Bay Area media.

There’s definitely a lot we can take out of the press conference. The dynamic of him moving on from Seattle to the division-rival 49ers was obviously a topic of conversation.

Though, Sherman’s presence as a major player between the NFLPA and the NFL was also a point of contention here. Sherman indicated that he would like to be the 49ers’ player rep, the same role he served in with the Seahawks. He also took on the Eric Reid situation and didn’t hold back.

Reid, a former Pro Bowler with the 49ers, has yet to find a new team in free agency. That’s despite the fact that he’s seen as one of the best defensive backs on the market. Unfortunately for Reid, his National Anthem protest has seemingly played a role in him being unemployed.

In talking about this, Sherman noted that there’s a chance we could witness a legal battle between the Players’ Union and the league should Reid remain unsigned.

“We are concerned (about it). He’s made enough plays in this league to be signed with a team and get his money.” Sherman said he’d be interested in being the Niners team union rep and indicated that if Reid doesn’t get signed, there would need to be legal conversations with the league about it,” Sherman said, via ESPN.

This comes as former 49ers quarterback Colin Kaepernick, who led the National Anthem protest, is currently in the courts alleging collusion by NFL owners to keep him out of the league.

If there’s one thing we learned about Sherman’s tenure in Seattle outside of his brilliant on-field performance, it’s that the future Hall of Famer is not afraid to talk about the key social issues of the day. Some might view him as too outspoken. Some might not agree with his stances. That’s more than fine. But this isn’t going to stop Sherman from continuing to lead the charge now that he’s in Northern California.

It’s definitely an interesting dynamic to look at. In a vacuum, the 49ers themselves could be part of some sort of legal conversations pertaining to Reid. After all, they have not re-signed him. Heck, San Francisco has not shown any real interest in bringing back its former first-round pick.

Now that Sherman is on the 49ers and talking about the legalities, one has to wonder what the conversations might look like behind closed doors in Santa Clara.