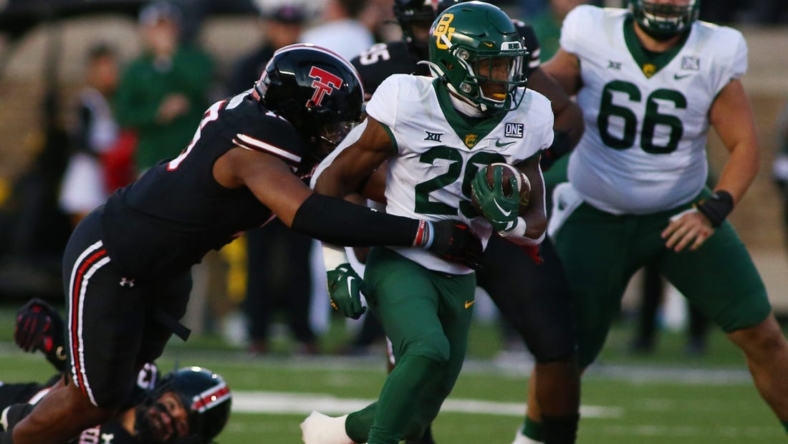 Freshman Richard Reese ran for 148 yards and three touchdowns and AJ McCarty returned an interception for another score as Baylor throttled error-prone Texas Tech 45-17 on Saturday in a Big 12 Conference dustup in Lubbock, Texas.

Reese had a career-high 36 carries in the win as Baylor (5-3, 3-2 Big 12) won its second straight game. Blake Shapen passed for 211 yards and a touchdown for the Bears.

Texas Tech (4-4, 2-3) suffered five interceptions from three quarterbacks. Behren Morton started and played the majority of the snaps, going 11 of 33 for 152 yards, a touchdown and three of the picks. Donovan Smith and Tyler Shough also saw action, with the latter uncorking the interception that McCarty turned into a pick-six with 4:04 to play to ice the win.

Qualan Jones added a final TD for Baylor on a 17-yard run with 45 seconds remaining.

Baylor got on the board first via a John Mayers 48-yard field goal with 4:39 to play in the first quarter. The Red Raiders answered as Trey Wolff’s 33-yard FG culminated a six-play, 48-yard drive and tied the game with 8:09 to play in the second quarter.

Reese’s first TD, on a 1-yard plunge, put Baylor up 10-3 with 3:39 remaining in the second quarter. That was more than enough time for Baylor to strike again and Reese strolled home for a 2-yard TD run that gave the Bears a 17-3 advantage at the half.

Baylor picked up where it left off early in the third quarter. Mark Milton intercepted Morton on the second play of the quarter’s opening possession, setting the table for a 9-yard scoring pass from Shapen to Hal Presley at the 11:09 mark.

Texas Tech finally got on track, driving 75 yards in 15 plays to a 1-yard Morton-to-Henry Teeter TD pass midway through the third quarter. Morton then drew the Red Raiders to within 24-17 on an 8-yard scoring scramble on fourth down with 2:46 left in the quarter.

Reese helped stem the tide with his third scoring run, again from a yard away, to push Baylor’s lead to 31-17 with 12:46 to play.