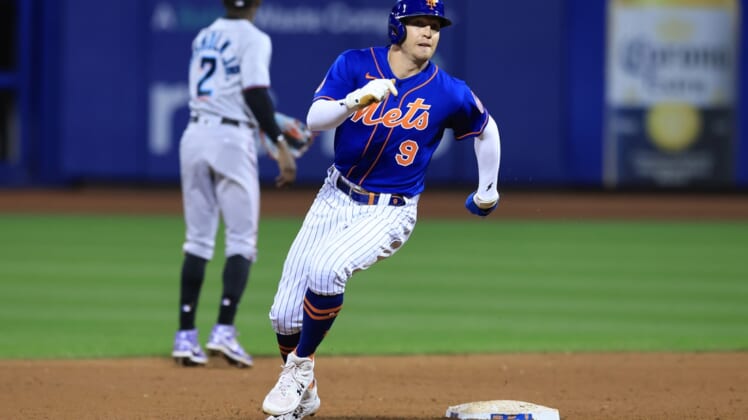 Rich Hill finally earned his first win with the New York Mets on Thursday night, when the 41-year-old left-hander tossed five solid innings in a 12-3 victory over the visiting Miami Marlins.

Hill, who was acquired from the Tampa Bay Rays when the Mets were atop the National League East on July 23, entered Thursday 0-4 in 12 games (11 starts) for New York despite a 3.86 ERA.

The southpaw appeared headed for another loss or no-decision when he threw 72 pitches in the first four innings as the Mets fell behind 3-2. However, New York sent nine batters to the plate in the bottom of the fourth and scored four runs against Sean Guenther (0-1), who opened the frame by plunking Javier Baez and Jeff McNeil.

Jonathan Villar followed with a game-tying RBI single before James McCann laced a two-run double. Michael Conforto, a pending free agent who may have been playing his Citi Field finale Thursday, chased Guenther with his second run-scoring single in as many innings.

Hill (7-8) came back out for the fifth and worked around a pair of one-out singles. He yelled and slapped his glove with his left hand after retiring Lewin Diaz on a popup to end the inning.

Hill allowed three runs (two earned) on six hits and three walks while striking out six. The win allowed him to avoid setting the franchise record for most starts in a season without a victory — seven, shared by Bob Moorhead (1962), Oliver Perez (2010) and Dillon Gee (2015).

The Mets piled on in the eighth against Luis Madero, who gave up a grand slam to Francisco Lindor, and backup catcher Sandy Leon, who surrendered a two-run homer to Pete Alonso. It was the second homer of the game for Alonso, who staked the Mets to a brief lead in the second with a solo shot.

Lewis Brinson hit a two-run homer in the third for the Marlins, who went ahead again in the fourth when Eddy Alvarez singled, went to third on a single by Magneuris Sierra and scored on a throwing error by Conforto from right field.