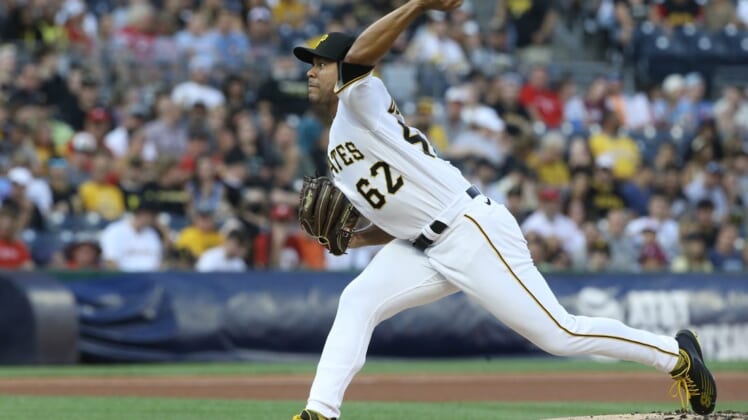 Rhys Hoskins hit a two-run homer in the top of the 10th inning Friday night to give the visiting Philadelphia Phillies a 4-2 comeback win over the Pittsburgh Pirates.

With Garrett Stubbs pinch-running for automatic runner Kyle Schwarber, Hoskins, who was 4-for-4 with a walk and three RBIs, hit his 20th homer, to center, off Duane Underwood Jr. (0-3).

Schwarber hit an RBI single for the Phillies, who erased a two-run deficit to win their third straight.

Seranthony Dominguez (5-3) pitched the ninth, and Connor Brogdon pitched the bottom of the 10th for his first save.

Ke’Bryan Hayes homered and Greg Allen added an RBI single for the Pirates, who dropped their fifth in a row.

After Kevin Newman sent Falter’s opening pitch of his outing bouncing over the wall in left-center for a double and Allen grounded, Falter struck out six in a row.

The sixth of those strikeouts was against Yoshi Tsutsugo leading off the bottom of the third. Falter then got Tyler Heineman to fly out to center, but Newman doubled to left.

Allen, with his first RBI as a member of the Pirates, doubled to left to drive in Newman for a 1-0 Pittsburgh lead.

With one out in the bottom of the sixth, Hayes hit his fifth homer, to right, to increase the Pirates’ lead to 2-0.

The Phillies tied it in the seventh. Matt Vierling singled to left. Pinch-hitter Bryson Stott flied out to center. Manny Banuelos replaced Yerry De Los Santos. He walked Odubel Herrera and struck out Johan Carmargo before Schwarber singled to right to bring home Vierling to cut it to 2-1.

Wil Crowe came in for Banuelos and gave up Hoskins’ base hit to left to drive in Herrera.