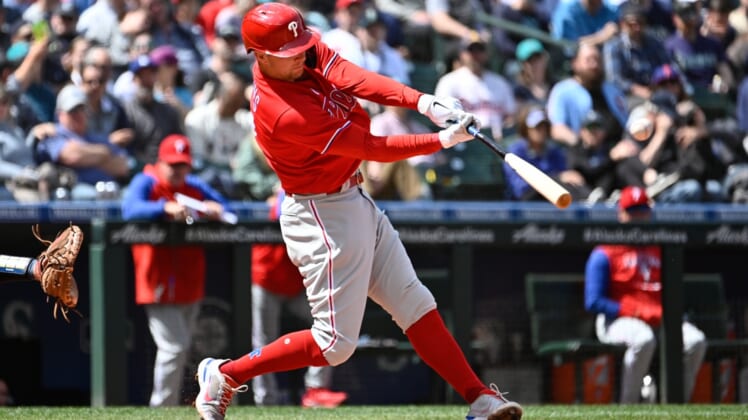 Hoskins homered in all three games of the series. He hit solo shots in a 9-0 victory Monday and a 5-4 loss Tuesday.

The Phillies won for just the third time in their past nine games. Seattle suffered its 12th loss in its past 15.

Phillies left-hander Bailey Falter, called up from Triple-A Lehigh Valley to make the second major league start of his career, allowed one run on five hits through 4 2/3 innings but was pulled one out shy of qualifying for the victory. Falter was relieved by Seranthony Dominguez (2-1) after allowing a two-out double to Adam Frazier in the fifth. Falter didn’t walk a batter and struck out four.

Trailing 4-1, the Mariners got a run back in the seventh as Jose Alvarado issued a pair of walks before Ty France grounded a run-scoring single into right field off Jeurys Familia. Rookie Julio Rodriguez flew out to center with runners on the corners to end the threat.

The Phillies’ Corey Knebel got the final four outs for his sixth save of the season.

Mariners right-hander Logan Gilbert (4-1), who had allowed just five earned runs through his first six starts of the season and was named the American League’s Pitcher of the Month for April, took the loss despite allowing just three hits over five innings and matching a career-high with nine strikeouts.

Trailing 1-0, Hoskins went deep in the fourth. Alec Bohm led off the inning by grounding a single into center field and Bryce Harper walked. Bohm advanced to third as Nick Castellanos flew out to deep right. Harper stole second and Jean Segura walked to load the bases.

On a 2-1 count, Hoskins lined a fastball down the left-field line, the ball just sneaking inside the foul pole to make it 4-1.

The Mariners scored the game’s first run in the third. With one out, Frazier grounded a double to left. An out later, Rodriguez hit a low liner just out of the reach of diving shortstop Bryson Stott for a run-scoring single.