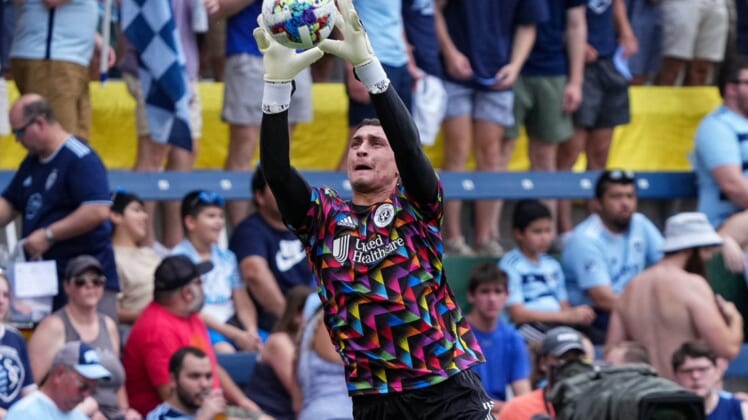 Substitute Emmanuel Boateng scored in the 87th minute to lift the visiting New England Revolution to a 2-1 victory over Sporting Kansas City on a steamy Sunday afternoon.

Gustavo Bou added his second goal of the season in the first game for the Revolution (5-5-4, 19 points) since the sale of leading scorer Adam Buksa to RC Lens in France was made official earlier this week.

Dylan Borrero picked up his first MLS assist on Bou’s goal in his first start since signing from Brazil’s Atletico Mineiro in late April.

New England won its second consecutive away game and ran its unbeaten run to six games while moving up to eighth in the Western Conference standings, one spot beneath the playoff line.

SKC’s Johnny Russell leveled the game just after halftime on a free kick that pulled him ahead of injured Daniel Salloi for the team lead with his fifth goal.

That goal came just after Oriol Rosell was sent off for his second yellow card in the 48th minute to reduce Kansas City (3-9-4, 13 points) to 10 men.

But Boateng’s late strike sent Kansas City to a third home defeat and second in a row. It remains last in the Western Conference table.

Bou was involved on the game-winner, sending the initial dipping shot from the left side of the penalty area toward the goal of Tim Melia, who saved it but could not hold the rebound.

Boateng reached it and under pressure from Melia got enough of the ball to send it bouncing over the line. Had it not crossed the line, the Revolution may have earned a penalty for Melia’s apparent foul on the sequence.

New England opened the scoring in the 30th minute on the counter moments after a promising SKC attack led by Cam Duke resulted in only a blocked shot.

Sporting leveled through Russell after Khiry Shelton won a free kick on a yellow-card foul by Andrew Farrell.

From about 25 yards out, Russell bent a left-footed strike over the defensive wall and into the top right corner at the near post to beat goalkeeper Djordje Petrovic.