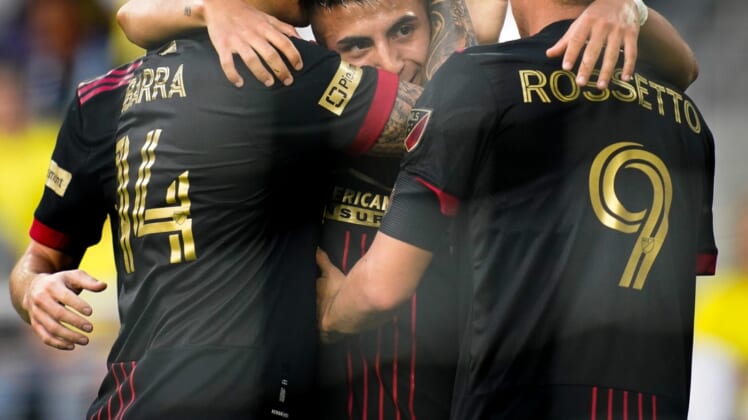 Atlanta United will try to respond to a disheartening exit from the U.S. Open Cup when they host the New England Revolution on Sunday afternoon.

Early goals from Thiago Almada and Luiz Araujo had staked Atlanta (4-4-2, 14 points) to a 2-0 lead at Nashville SC in Wednesday night’s fourth-round encounter. But Atlanta conceded a penalty early in the second half, then C.J. Sapong leveled the match for Nashville in second-half stoppage time. And early in extra time, Ethan Zubak scored to send Nashville to the round of 16.

“I think we have a very young group and we need to learn from these types of stages where we didn’t succeed this time,” Pineda said. “But maybe if we face something similar in the future and this experience will help us.”

That includes the 21-year-old Almada, who has a goal and an assist in his first MLS season, and 20-year-old center-back George Campbell, who already has eight appearances this season and figures to get more in Robinson’s absence.

The Revolution (3-5-2, 11 points) made easier work of their midweek U.S. Open Cup fixture in a 5-1 home win over FC Cincinnati. New England played most of its healthy starters, including leading scorer Adam Buksa and top assist man Carles Gil, who combined for all five goals on the night.

Buksa leads New England with four MLS goals and Gil has three. Gustavo Bou has yet to score and has played only twice in 2022 after he posted 15 goals last season. He’s questionable to return Sunday from a thigh injury.

“Their depth will not be as great as it’s been obviously because of the injuries, but they still have a good starting team, some good attacking players. Their striker, if I’m not mistaken, had a bunch of goals last week so I’m not feeling sorry for them,” said New England manager Bruce Arena. “I think they have a pretty good team. We have to go there and play very well to try to bring home some points.”