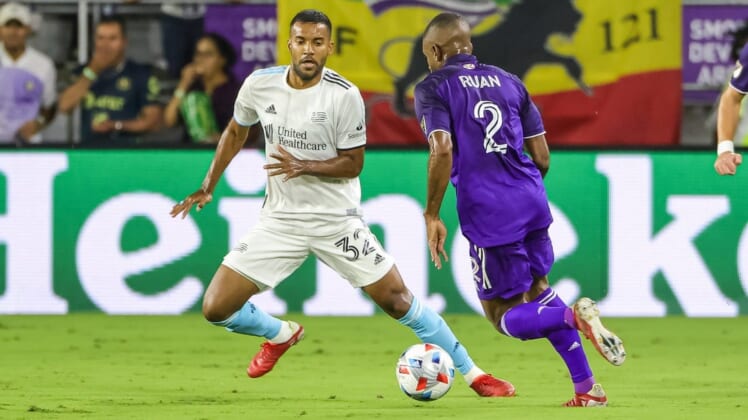 The New England Revolution face a quick turnaround on Wednesday night when they host an Orlando City side playing for the first time in two-and-a-half weeks.

The Revolution (5-5-4, 19 points) are coming off a 2-1 win Sunday at Sporting Kansas City, a game in which they may have proved life after Adam Buksa might not be so difficult.

Gustavo Bou and Ema Boateng scored for the visitors in their first match since Buksa — who leads New England with seven goals this season — was sold to RC Lens in France’s top flight.

Colombian Dylan Borrero also provided an assist in his first MLS start since signing with the Revs in April.

But after that victory, manager Bruce Arena pushed back against the idea that the win in Kansas City was a clear picture of how his team would attack opponents without Buksa going forward.

“Let us, you know, get some games under our belt,” Arena said. “Adam hasn’t been gone that long. Gustavo just came back (from injury). You know, we will be bringing back (defender) Henry Kessler. So, we’re not yet ready to, you know, we’re not going to reinvent ourselves. But, we’re going to play into our strengths and we know our players.”

Arena’s opposite number, Oscar Pareja, has had an extended break to solve his squad’s recent struggles prior to the start of the June international window.

Orlando (6-5-3, 21 points) has taken only five points from their last six matches overall and has dropped two of three at home. Most troublingly, all three of their defeats haven’t been particularly close, coming by a combined eight-goal margin.

In the most recent, the Lions gave back an early lead in a 3-1 home loss to FC Dallas on May 29 despite Ercan Kara’s fourth goal of the season.

“At this point in the season we have given away results at home where we normally are very strong, with games that we have played way better than many others,” Pareja said after that game. “We walk off in defeat and frustration. It is a concern, for sure. I think it’s something that we’ll analyze.”

The Lions will likely be without first-choice goalkeeper Pedro Gallese, who played for Peru in Monday’s World Cup qualifying playoff. Australia triumphed on penalties following a 0-0 draw.