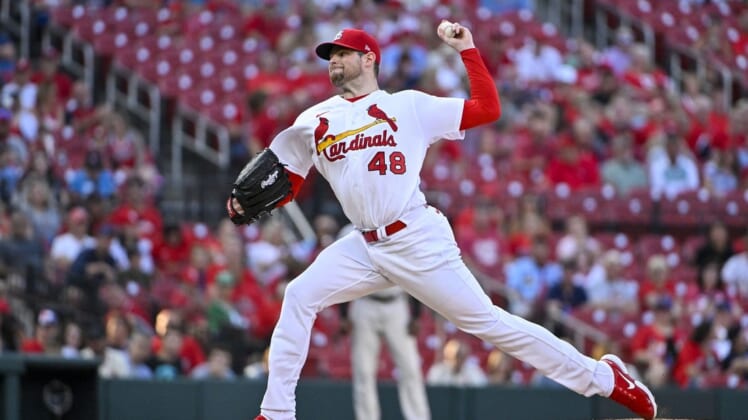 Judging by his stellar work, Jordan Montgomery is fitting right in with the St. Louis Cardinals.

He also has been pretty good against the Chicago Cubs during his career.

Looking to go 4-0 with his new team, Montgomery tries to help the National League Central-leading Cardinals to a season-high eighth straight win on Monday night in the opener of a five-game set against the Cubs.

Montgomery (6-3, 3.29 ERA) went 0-2 with a 5.36 ERA in his last eight starts with the New York Yankees before being dealt to St. Louis for outfielder Harrison Bader earlier this month. However, he has allowed just one run, 12 hits and three walks while striking out 17 through 16 2/3 innings in his three starts with the Cardinals, good for a 0.54 ERA.

The left-hander allowed the one run, plus six hits to go along with eight strikeouts, over 5 2/3 innings during St. Louis’ home victory over the Colorado Rockies on Wednesday.

“It’s been great having him here pounding the zone and attacking teams,” teammate Nolan Gorman said. “It’s been fun to watch, for sure.”

Though this will be Montgomery’s first road start since joining the Cardinals, he is 2-0 with a 1.32 ERA in two career starts against the Cubs. One of those outings came on June 11 at Yankee Stadium, where he allowed five hits and fanned five without a walk over seven innings during an 8-0 victory.

Winners in 16 of their past 19, the Cardinals are batting .337 with 14 homers during their second seven-game winning streak in less than a month. In the current surge, St. Louis has outscored its opponents 56-20.

Coming off a three-game sweep of the Arizona Diamondbacks in Phoenix, St. Louis eyes a fourth consecutive win over the Cubs, who are 4-7 in the season series. Despite that mark and falling 5-2 against the Milwaukee Brewers on Sunday, Chicago is 17-11 since the All-Star break and has won five consecutive series plus a makeup game against the Baltimore Orioles.

Scheduled Chicago starter Drew Smyly (5-6, 3.67 ERA) has been nearly as good as Montgomery this month, going 2-0 with a 1.06 ERA and 13 hits allowed in three August starts. The veteran left-hander has yielded just two runs in those outings, both coming over 5 1/3 innings during the Cubs’ 3-2 road victory over the Washington Nationals on Wednesday.

Cubs All-Star Ian Happ socked his 100th career homer Sunday and is 8-for-19 (.421) with three doubles and a home run against the Cardinals at Wrigley Field this season. Meanwhile, teammates Yan Gomes and Franmil Reyes are a combined 6-for-14 (.429) vs. Montgomery.

It’s uncertain if Chicago slugger and ex-Cardinal Patrick Wisdom, who has posted back-to-back seasons of at least 20 homers, will be available after he injured a finger on Saturday in the Cubs’ 6-5, 11-inning win over Milwaukee. Wisdom sat out the Sunday contest.