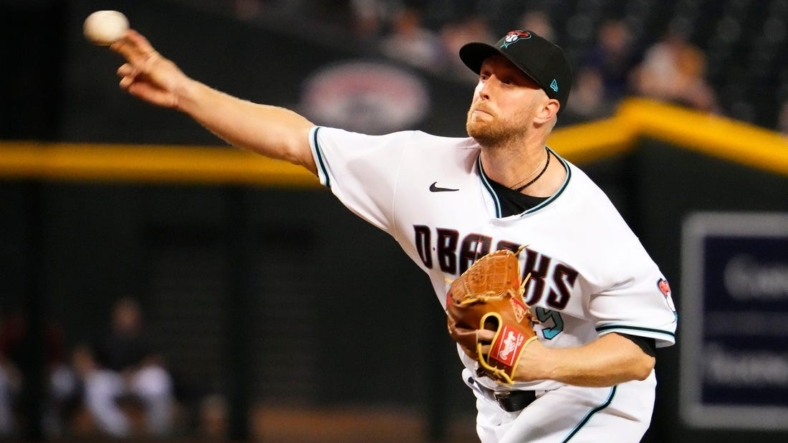 A run of nine wins in 11 games has brought the Arizona Diamondbacks to the fringe of the National League wild-card race.

Following a 5-0 victory over the host San Diego Padres on Monday, the Diamondbacks will attempt to extend their surge when the three-game series continues on Tuesday.

Arizona sits eight games behind the Padres and the Philadelphia Phillies, who are tied for the second and third NL wild-card positions.

The good news for the Diamondbacks is that they have six head-to-head meetings remaining against San Diego — and the Padres have hit a minor lull, particularly at home.

Monday marked the ninth time this season that the Padres were shut out. Six of those blankings came in San Diego, where the Padres are averaging 3.8 runs a game this season. However, over their past seven home games, the Padres have scored a total of nine runs while going 2-5.

“We have to start playing better and winning at home,” San Diego manager Bob Melvin said on Monday after the Diamondbacks’ Ryne Nelson blanked the Padres on four hits over seven innings in his major league debut.

And it just gets tougher for the Padres.

In addition to his pitching prowess, the 33-year-old veteran is providing a role model in the clubhouse.

“We have a lot of young players who are new to the major leagues,” Lovullo said. “They’re excited. They’re having fun. They bring a lot of enthusiasm with them. But they’re also looking around to see how things are done. What better example than Merrill Kelly.”

As for the Padres, the momentum they seemed to be building during a 6-1 start to a nine-game road trip seems to have evaporated in three straight losses during which they have been outscored 26-5.

Enter Musgrove. He pitched well against the Diamondbacks on April 9 in his season debut (six innings, two runs eight strikeouts), an outing that triggered an 8-0 record and a 1.59 ERA after his first 12 starts. The Padres won 11 times in those 12 outings, but they are just 5-7 in his 12 most recent appearances.

Musgrove had lost six straight decisions since late June before he held the San Francisco Giants to three runs on three hits and two walks with a season-high 11 strikeouts over 6 2/3 innings on Wednesday.

“We got some runs and picked Joe up,” Melvin said after the Padres’ 5-4 victory in that contest. “He should have been getting more success from the way he was pitching.”