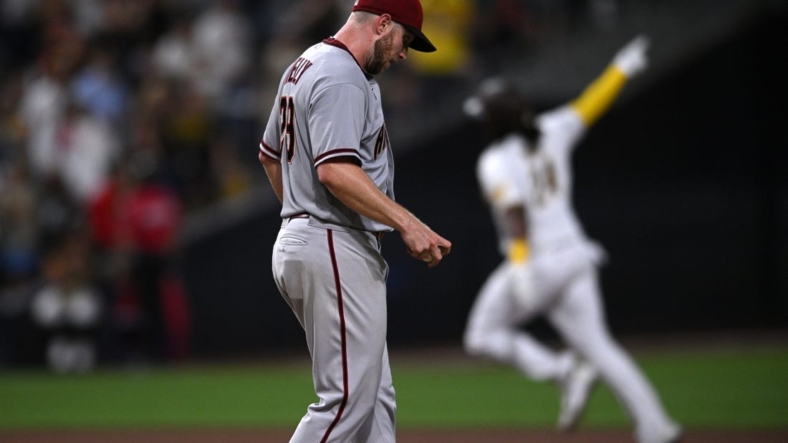 Seldom have the San Diego Padres been happier to be playing in the rubber match of a series.

Not only were the Padres trailing 5-0, but Diamondbacks starter Merrill Kelly had retired all 12 hitters he had faced. And the Padres had gone 26 innings without scoring a run at home.

But if the Padres (75-62) have been one thing this season, it’s resilient. And they rallied Tuesday to score their 10th walk-off win of the season, on Jorge Alfaro’s two-run single in the bottom of the ninth, widening their lead over the Milwaukee Brewers to three games in the battle for the National League’s final wild-card berth.

“That was a tough loss,” said Arizona manager Torey Lovullo, whose young Diamondbacks would have advanced their long-shot wild-card dream a bit further with a win.

“We’ve got a lot of promising young pitchers, and Tommy Henry and Ryne Nelson are two of them,” Lovullo said.

Nelson shut out the Padres over seven innings on four hits and no walks with seven strikeouts Monday night in his big league debut. The Diamondbacks won 5-0.

For Henry, his most recent outing was last Wednesday against the Phillies. He gave up seven runs on eight hits and four walks in just four innings as his ERA shot up from 3.25.

Meantime, Darvish is aging like fine wine. The just-turned 36-year-old, who has played in the major leagues and in Japan, celebrated his 3,000th professional strikeout Friday against the Los Angeles Dodgers.

He went seven scoreless innings, giving up only two hits in the Padres’ 7-1 victory.

“Before this season, I didn’t know that much about Darvish, other than the fact that he had a lot of pitches in his repertoire,” Melvin said. “But the way he prepares and studies for every start is pretty impressive to watch. He’s a great example for other pitchers.”