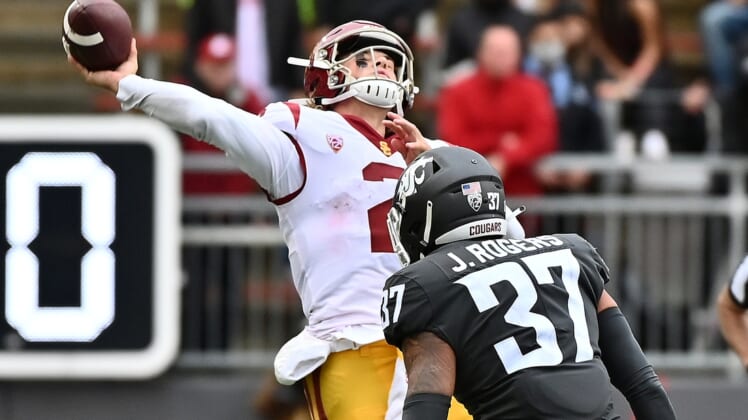 Sep 18, 2021; Pullman, Washington, USA; USC Trojans quarterback Jaxson Dart (2) throws the ball up before Washington State Cougars linebacker Justus Rogers (37) can get to him in the second half at Gesa Field at Martin Stadium. The Trojans won 45-14. Mandatory Credit: James Snook-USA TODAY Sports

Southern Cal is down another quarterback.

Trojans true freshman quarterback Jaxson Dart underwent surgery to repair a meniscus injury and will miss “an extended period of time,” according to multiple reports Thursday.

Dart relieved starting quarterback Kedon Slovis last Saturday when Slovis injured his neck on USC’s first possession against Washington State. Dart set a program record for most passing yards in a debut — 391 — to go with four touchdowns and two interceptions as the Trojans won 45-14. He also led the team in rushing with 32 yards.

But Dart suffered a meniscus injury during the game, reportedly during the second quarter, and played through it.

Slovis returned to practice this week and is likely to resume No. 1 QB duties once healthy. Without Dart, the Trojans also have Miller Moss, a former Top 100 prospect.