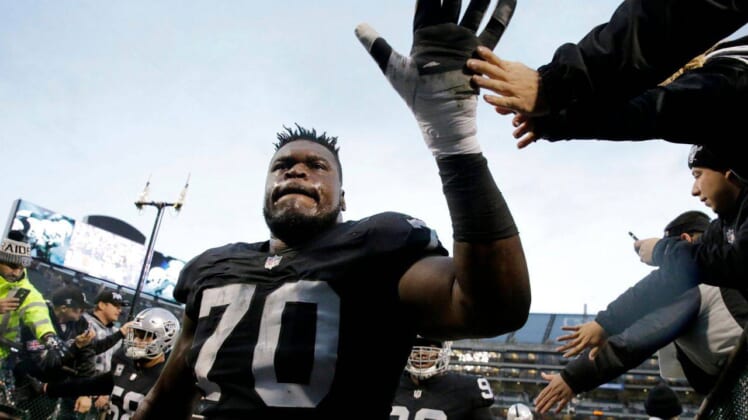 Less than 24 hours after the team made a big splash in trading for disgruntled wide receiver Antonio Brown, the Raiders have an agreement in place to trade the two-time Pro Bowler to New York.

New Raiders general manager and coach Jon Gruden are making moves ahead of the first week of NFL free agency to reshape their roster this time trading offensive guard Kelechi Osemele to the New York Jets for a fifth-round draft pick.

Multiple news outlets are reporting the team will ship Osemele to the Jets, along with a 2019 sixth-round NFL draft pick, for a fifth-round pick in this year’s draft. Osemele was thought to have been a possible salary cap cut candidate to clear $10.2 million in cap space. The team is reportedly signing Brown, who they just agreed to acquire last night, to a new three-year $50 million contract.

Osemele, while one of the anchors of the Raiders offensive line, was beset by injury last season and Michael Gehlken of the Las Vegas Review-Journal reported some in the organization felt he took too long to come back from a knee injury. Although never confirmed, his eventual release or trade and been rumored going back to the end of the 2018 season.

Even prior to the Raiders trading Osemele, the team was considered to be in the market for free agent offensive linemen and expected to address the need in Apri’s draft too. Just last week the Raiders signed reserve offensive linemen Denzelle Good to a one-year contract extension. Good joined the Raiders off waivers from the Indianapolis Colts before Week 14 last season.

It appears Mayock, Gruden, and the Raiders might be in for a busy week in Alameda.