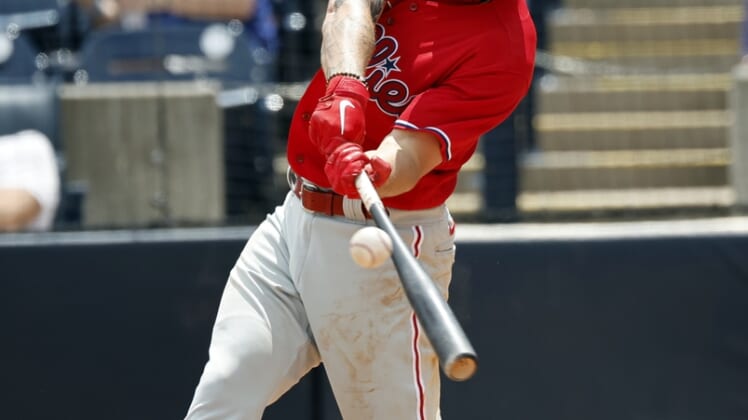 Philadelphia Phillies outfielder Mickey Moniak sustained a fractured right wrist in Wednesday’s spring training game and will miss up to six weeks, according to published reports.

The 23-year-old Moniak, who was the No. 1 overall pick of the 2016 draft, was expected to be the team’s primary center fielder after a strong spring. Moniak batted .378 with six home runs, four doubles and 11 RBIs in 37 spring at-bats.

The left-handed-hitting Moniak hit a two-run homer in the second inning during Wednesday’s 9-2 victory over the Tampa Bay Rays. But in a fourth-inning at-bat, Moniak was hit in the wrist while swinging at Ryan Yarbrough’s pitch and striking out.

Initial X-rays were negative and the injury was termed a bone bruise.

But Moniak apparently reported increased soreness on Thursday, leading to further testing that detected the fracture.

Moniak batted .238 with 15 homers and 65 RBIs in 100 games at Triple-A Lehigh Valley in 2021. There was no minor league baseball in 2020 due to the COVID-19 pandemic and he made his big league debut during the summer.