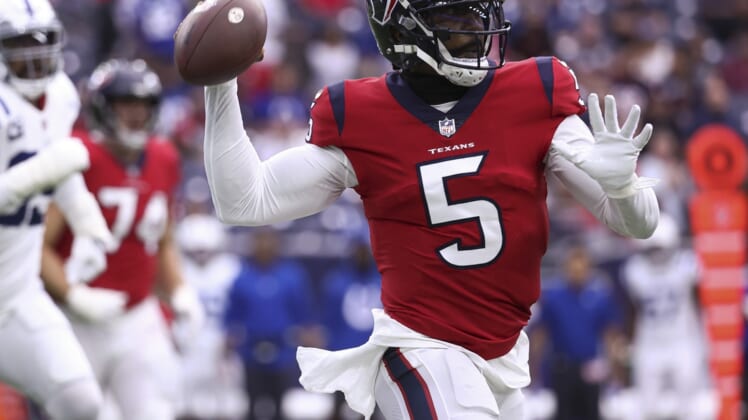 ESPN said the sides agreed on a two-year contract worth $17 million, with $8.5 million of it guaranteed.

The Giants would mark the sixth NFL team for Taylor since he entered the league in 2011. It remains to be seen whether the franchise’s new staff, headed by coach Brian Daboll and general manager Joe Schoen, want Taylor to back up incumbent Daniel Jones or compete with him for the starting job.

Taylor, 32, played for the Houston Texans in 2021. He began the season as Houston’s starting quarterback with Deshaun Watson sidelined amid his legal trouble. Taylor missed some time with a hamstring injury, and in December, he was benched in favor of rookie Davis Mills for the remainder of the season.

Taylor was named to the Pro Bowl in 2015, his first of three seasons as the Buffalo Bills’ starting quarterback. He overlapped with Schoen in Buffalo in 2017 when Schoen was the Bills’ assistant general manager. Daboll, who was Buffalo’s offensive coordinator from 2018-21, did not work with Taylor there.

In 78 career games (53 starts), Taylor has amassed 10,736 passing yards, 59 touchdowns and 25 interceptions with a 61.3 percent completion rate. He has also gained 2,001 rushing yards and run for 19 touchdowns, 14 of those coming during his three seasons with the Bills.