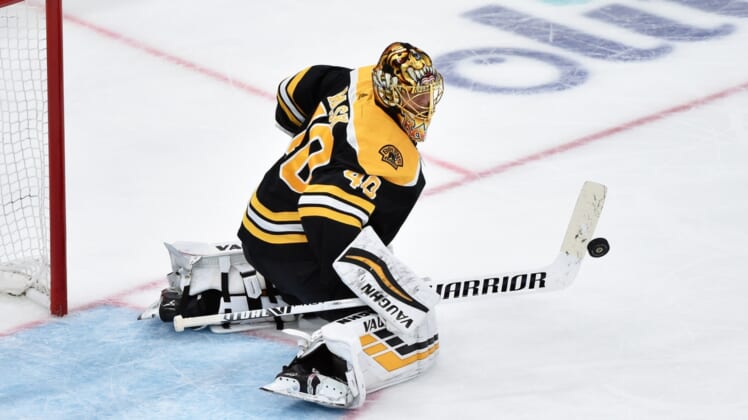 May 31, 2021; Boston, Massachusetts, USA; Boston Bruins goaltender Tuukka Rask (40) makes a save during the third period in game two of the second round of the 2021 Stanley Cup Playoffs against the New York Islanders at TD Garden. Mandatory Credit: Bob DeChiara-USA TODAY Sports

The Boston Bruins are bringing back goaltender Tuukka Rask for the rest of the season on a prorated one-year, $1-million contract, multiple outlets reported Tuesday.

He is expected to earn $545,000 based on the number of games remaining in the season.

The Providence Bruins of the American Hockey League released him from his professional tryout contract with the team earlier Tuesday, although he didn’t appear in any AHL games since signing with Providence on Thursday because they were postponed due to COVID-19 protocol.

Rask, 34, had played out an 8-year, $56-million contract and was an unrestricted free-agent as he worked his way back from July surgery to repair a torn labrum in his right hip.

“I feel great … I don’t have to think about (the hip) locking up on me again and creating that pain,” Rask said last week.

Rask had been informally practicing with the NHL’s Bruins, who host the Montreal Canadiens on Wednesday night. Considering that Boston is amid a stretch of five games in eight days, Rask is likely to return to action soon.

He started all 11 playoff games for the Bruins, whose season ended in the second round with a loss to the New York Islanders in Game 6 of the series.

He holds Boston’s franchise record for most games played and wins by a goaltender.